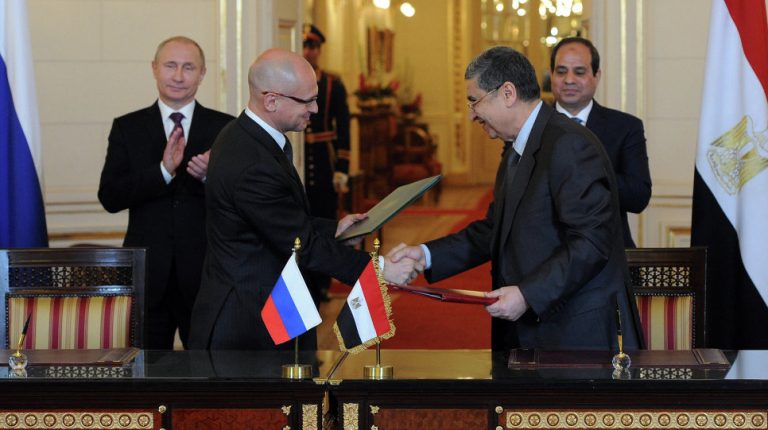 Serious plans for a nuclear power plant project in Egypt have existed since 1983, when the Egyptian government launched a tender for the establishment of a nuclear power plant with a capacity of 900 MW in an attempt to diversify energy sources. However, three years later, the Chernobyl disaster took place in 1986 in Ukraine, resulting in halting the project entirely.

In 2010, during ousted president Hosni Mubarak’s era, the Egyptian state began resuming negotiations and preparations for the power plant. Soon, El Dabaa was chosen as the new location for the plant. El Dabaa is a city in the governorate of Matrouh, located on Egypt’s northern coast, at a distance of about 300 kilometres from Cairo.

A conflict then took place between the state and the residents of El Dabaa in 2012 about the land, as the residents refused to give it up. However, the Egyptian Armed Forces intervened in 2013 and it was eventually agreed that the land would be the location of the future plant.

In March 2015, negotiations resumed when Egypt chose Russian Rosatom’s offer to establish the Dabaa plant, over five other offers made by Korea, the US, China, France, and Japan.

Rosatom is a Russian national nuclear corporation bringing together nearly 400 companies, and has 70 years of expertise in the nuclear field.

Rosatom will be providing the Dabaa plant with nuclear fuel for 60 years according to the prices agreed upon in the contracts, and if Russia cannot supply the plant with the required fuel, Egypt may import fuel from any other chosen country, with daily fines imposed on Rosatom.

Establishment of the plant

Dabaa Nuclear Power Plant’s first phase will contain four nuclear reactors that will generate electricity with a total capacity of 4,800 MW, with each reactor generating 1,200 MW individually. The establishment process is expected to take five to seven years before a trial operation takes place over two years. The complete operation of the first two reactors should take place six years from the date of casting the first bulk of concrete.

The cost, until starting operation, is estimated to be $45bn. This cost is calculated based on the Russian loan that covers nearly 85% of the total expenses, while the remaining 15% is covered by Egyptian banks. There will also be more costs because of the interests on the loan, training the workers, and maintenance costs, in addition to other expenses. Egypt will be repaying the loan through the energy sold from the plant. The expected time needed to recover the cost of establishing the nuclear plant will range from 13 to 15 years.

The loan is expected to be repaid over 22 years, and Egypt will start paying the first installment in 2029.

Operation of the plant

Egypt will be managing the complete operation of the Dabaa plant. Based on the agreement with Russian Rosatom, the company will be contributing to the operation and will be supervising the project. It will also be providing the plant with technical support for ten years with the possibility of a contract renewal.

About 700 engineers and technicians are expected to take part in operating the plant.

The Egyptian government has been seeking to establish an economic zone along the banks of the newly-expanded Suez Canal, through which over 8% of global trade passes every year. The project is known as The Suez Canal Economic Zone (SCZone).

The SCZone is expected to be yet another form of cooperation between Egypt and Russia, resulting from the proposal of President Abdel Fattah Al-Sisi during his visit to Sochi, Russia in August 2014.

In 2016, Minister of Trade and Industry Tarek Kabil and his Russian counterpart, Denis Manturov, signed a memorandum of understanding to establish the SCZone in Egypt.

With several economic projects ahead in 2018, the year is expected to be filled with many surprises that may bring several expected and unexpected benefits to the Egyptian economy, as well as new, growing ambitions.