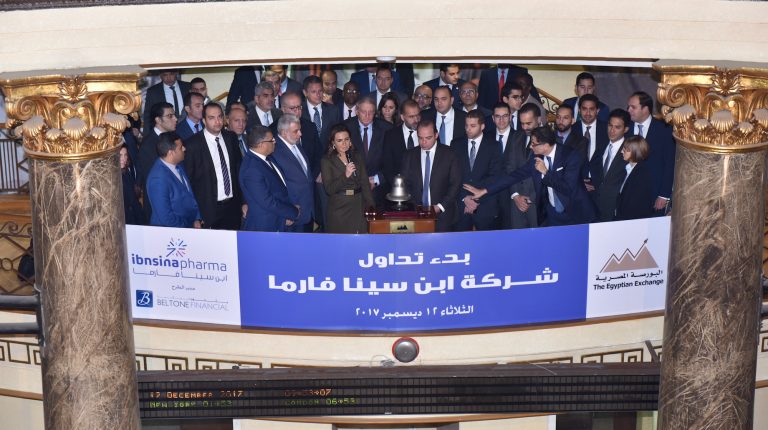 Ibnsina Pharma started trading Tuesday on the Egyptian Exchnage (EGX) in a heavy trade, as investors are building new positions in one of the fastest-growing and second-largest distributors of pharmaceutical products in Egypt.

Minister of Investment Sahar Nasr opened the first trading session saying, “the initial public offerings (IPOs) of companies reflect the confidence of investors in Egypt’s economy and its ability to attract foreign inflows.”

“Trading on Ibnsina shares is crucial to expanding governance operations, disclosure, and transparency of companies,” Chairperson of the EGX Mohamed Farid said in a statement.

He also noted that the EGX will exert greater efforts to attract more companies to list in the coming period.

Egypt’s second largest distributor of pharmaceuticals set the share price at EGP 5.8 due to heavy demand for both the private offering and the IPO.

The volume of orders amounted to EGP 22.5bn ($1.3bn), with 500 orders coming from local companies, in addition to investors from the US, Europe, the UK, and Gulf countries.

Turnover for Ibnsina came in at EGP 357.75m, representing 24% of the total market turnover on Tuesday, while its volume stood at 53 million shares.

The company’s capital amounts to EGP 168m distributed across 672 million shares at EGP 0.25 per share.

The company aims at raising its sales by 30% in 2017, managing director Mahmoud Abdel Gawad told a press conference last week.

The Egyptian company plans to boost its capital by adding EGP 280m of a total EGP 1.56bn from its initial public offering (IPO), he added.

Ibnsina seeks to boost its annual profits to EGP 190m this year, against profits of EGP 101.7m last year.

The company plans to invest about EGP 700m to increase distribution and operation centres to 74 from the current 55, over the coming five years, Abdel Gawad continued.