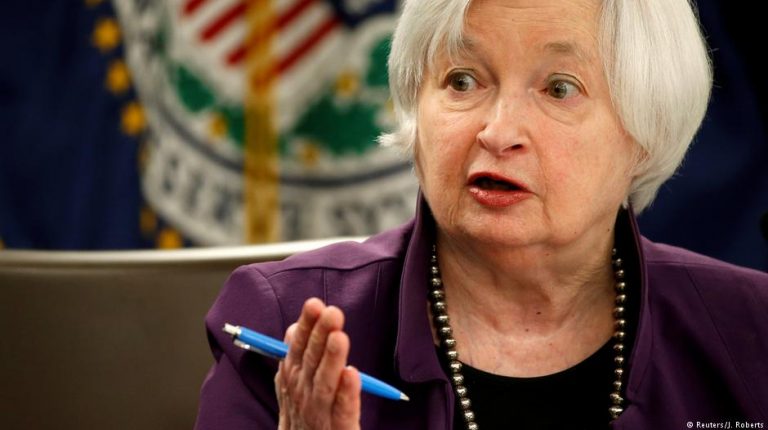 The third increase in US interest rates this year was widely expected. But as Fed chair Janet Yellen is about to leave office, questions about the central bank’s future rate policy in the Trump era are emerging.At its final meeting in 2017, the US Fed’s rate-setting Federal Open Market Committee (FOMC) decided to increase US benchmark interest rates by a quarter-point, setting the target range between 1.25 percent and 1.5 percent in line with what financial markets had previously expected.

The third rate hike this year — and only the fourth since the end of a decade of ultra-low rates in the US last year — came as Federal Reserve Chair Janet Yellen presided over a policy meeting for the last time.

US President Donald Trump has opted to replace her after just one term in office, with current board govenor Jerome Powell set to take over from Yellen in February.

Read more: Janet Yellen to quit US Fed board after Jerome Powell sworn in

The new US Fed chair enters office at a time when US inflation is beginning to show some flickers of life. However, they are likely not enough to extinguish disagreements among Federal Reserve officials about the near-term threat of rising prices, and subsequently the need to raise rates further in 2018 and 2019.

In her statement, Yellen gave an upbeat assessment of the economy she leaves behind. She presided over sharp declines in unemployment, steady growth and no market mishaps during her four-year term.

Yet, investors were primarily focusing on the Fed’s assessment of economic developments in the two years ahead and seen against a backdrop of Donald Trump’s tax-cutting package. They are keen to know just how stimulative the Fed expects Republicans’ proposed tax reductions to be, and how much extra tightening it will pencil in as a response.

According to Fed projections, gross domestic product (GDP) is expected to grow 2.5 percent in 2018, up from the 2.1 percent forecast in September, while the unemployment rate is seen falling to 3.9 percent next year, compared to 4.1 percent in the last set of projections.

But inflation is projected to remain shy of the Fed’s 2 percent goal for another year, with weakness on that front remaining enough of a concern that policymakers saw no reason to accelerate the expected pace of rate increases.

The so-called dot plot of interest rate predictions suggestes that there will be three quarter-point increases next year. Some Wall Street analysts predict that could be upgraded to four if the US economy expands stronger and inflation surges above the Fed’s target of 2 percent.