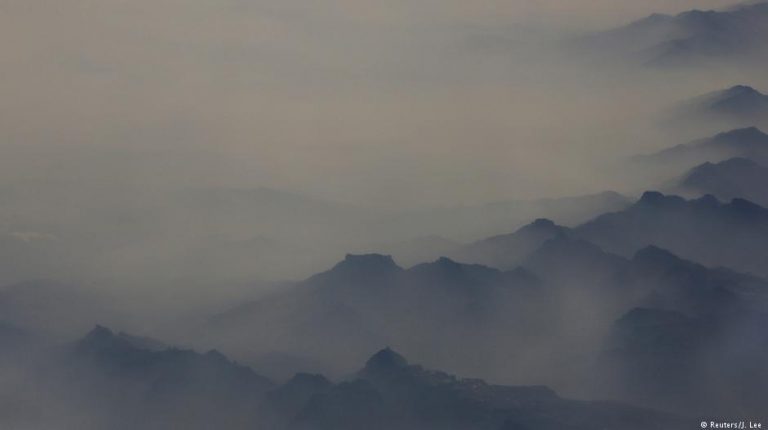 Plans to rapidly cut coal use in China halted after households were left without heat. But air quality appears to have improved despite the setback.China has made high-profile commitments this year to cutting carbon emissions and prioritizing a cleaner environment. But an action plan aimed at cutting coal use across large swathes of the country has left homes without heating, and forced the government to limit gas supplies to industry.

The interwoven grid of megacities that spans Northern and Eastern China suffers some of world’s worst air pollution. Across the country as a whole the World Health Organization estimates that 1.1 million people die prematurely each year as a result of the problem.

Coal-intensive industries and over 200 million cars are the main source of this pollution. But in winter, the problem is compounded by suburban homes heated with coal-fired stoves.

“This is an issue of national health and needs to be addressed with the utmost urgency,” President Xi Jinping declared in August, launching the plan to tackle smog in 28 cities in the provinces of Hebei, Shandong, Henan and Shanxi, including the capital Beijing.

Turning on a dime

The cities were told to lower concentrations of fine particulate matter — classified as PM2.5 — by at least 15 percent, mainly through the phase-out of the 11.2 million tons of coal used to heat around 3 million households in the region.

Coal-fired heating systems were ordered to be replaced by heating with gas or renewable energy, with “severe punishments” threatened against those using coal.

But gas shortages forced the government to lift these restrictions after some households were reportedly left in the cold.

Valerie Karplus, assistant professor of global economics and management at the MIT Sloan School of Management, said the u-turn wasn’t a major set-back for the country’s efforts to cut CO2 emissions, but showed the transition would take time.

“The current short-term shortages do not undermine the long-term goal of reducing coal in China’s energy mix,” Karplus told DW. “They highlight how the energy system cannot turn on a dime.”

Measures to cut air pollution in the area had been on the cards since 2013, when China’s State Council responded to public outcry with promises to improve air quality. But the sudden ratification of the action plan just two months before the start of winter demanded possibly the fastest energy transition on this scale ever attempted.

Too little infrastructure, too little gas

Hasty construction of gas infrastructure and a range of renewable energy megaprojects are underway in all 28 cities. But not nearly enough was ready to cope with temperatures dropping to an average of -2°C in December. Energy shortages began hitting the region from the December 1.

An employee of the China Huadian Corp thermal power plant in Shijiazhuang, the capital of the province, said his company was indeed transforming heating facilities across the province, but it was impossible to complete the work before winter began.

“To replace coal with clean energy for heating in all of Hebei [province] is a huge project, and it takes time,” the employee told DW.

Unfinished construction isn’t the only problem. Rising demand sent gas prices soaring, with LNG hitting a domestic record price of 9,000 yuan ($1,361), a metric ton on December 1. Hebei soon issued an orange alert for its natural gas supplies, projecting a gap of 10 to 20 percent in demand.

“The attempt to replace coal with gas in China has been a factor in significantly increased Chinese demand, which has had an impact on liquefied natural gas prices, as China is a major consumer of gas supplied on the international market,” Duncan Freeman, a research fellow at the College of Europe EU-China Research Center, told DW.

In a public statement on December 7, a week after the gas shortage began to leave some households without heat, the Ministry of Environmental Protection issued a statement to authorities in all 28 cities saying it was their responsibility to “ensure a warm winter” for citizens, despite dwindling heating supplies.

The ministry confirmed that burning coal in household stoves would not be penalized, adding that measures would be taken to increase the gas supply and stabilize price.

“In areas where the [transitioning] projects have been completed, the supply and price of natural gas and electricity must be kept stable,” a spokesperson from the Ministry of Environmental Protection told DW. “In the case of a supply shortage, priority should be given to civil use rather than industrial use.”

That has meant cutting off or limiting the gas supply to some major industrial consumers. The government also ordered a coal-fired power plant in Beijing that had been shut down earlier this year to resume operation.

“Switching the generator back on for one winter season will provide much-needed heat,” Karplus said. “It will be important that emissions control equipment is used when generating electricity from coal to mitigate impacts on air quality and health.”

But despite the setbacks, the action plan does appear to have reduced smog. Greenpeace said Beijing’s air quality in November was the best it had been at that time of year since 2013.

One Beijing resident told DW the difference was tangible. “For the last couple of years I would have worn my pollution mask continuously for three months, to filter out the heavy smog that hangs on the city,” he said. “This winter I have already taken my mask off five times or so.”

Oliver Sartor, senior climate and energy research fellow at the Institute for Sustainable Development and International Relations said public health was also an important factor in properly planning the shift away from coal.

“They are still giving priority to gas over coal where they can in these cities,” Sartor told DW. “They simply have adopted a policy very quickly and building appropriate gas infrastructure for heating takes time. They can’t do it overnight, nor should they – the risks to health of leaky gas pipes are bad for health and safety and potentially worse than climate for coal to the high global warming potential of unburned methane.”