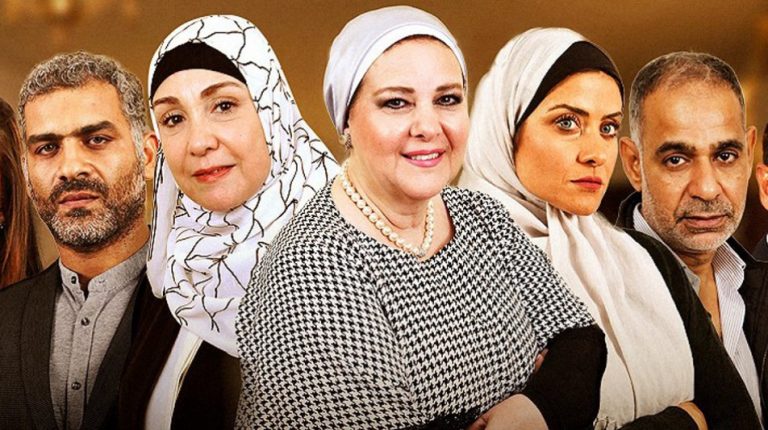 “I want to request something of you, you can accept or reject, but in case you reject, lets us continue as friends. Ali, I want to marry you, I know that you don’t want to marry, and me too, but I want to have children. I know that you are not in a relationship right now. I feel that I’m getting older. I need to raise a child and take care of him, I thought of adopting a child, but it seems selfish, as I want a child of my bearing. I can’t do this unless I’m officially married,” Hala, a 35-year-old beautiful lady said to her colleague Ali, who is already interested in her.

This is a scene in the series “Sabae Gar” (The Seventh Neighbour) currently airing on one of the privately-owned channels, showing daily lives and stories of families from the middle class. The series has sparked great controversy among social media users, due to presenting bold facts about people’s lives, which are actually happening in society and everybody knows about.

Among the stories criticised in the series was Hala’s case, a girl who wants to be a single mother and researches medical methods to have a child, rather than get married. She believes that she will never get married and is unsure of ever having a fruitful marriage life.

Apparently, Hala has issues with marriage due to her parents’ unsatisfying experience. Her father was portrayed as a swindler, making fake deals with people, taking their money and disappearing. She believes that she could not get married normally, like any other girl, as no one will accept her father’s manners, and she will always be judged by them.

Hala is portrayed as a very beautiful lady, attractive to any man, a successful manager, who was able to afford her own apartment and a fancy car, but never had a relationship. She was raised by her mother who was independently responsible for her and her sister.

The protagonist fears exceeding childbearing age, therefore she looks for ways to freeze her eggs and buy sperm. But when she fails, she makes an offer to a man in his late 30s to marry her to help her have a child, promising that she will take full responsibility for the baby and not ask him for any support. “All I want is to have the sperm that can enable me to have a baby”.

However, Ali had previously told her that he does not prefer to have children, but later accepted her offer.

The concept of having a child as a single parent without being married is something not new to society. In other situations, albeit not similar to Hala’s condition, there are dozens of mothers who raise their children alone, without the help of a man, due to divorces or breakups.

On social media platforms, the story was highly criticised, with people expressing surprise over such a case, questioning the possibility such stories existing in Egyptian society. It was further viewed as a promotion for a phenomenon that does not align with society’s ethics and Islamic beliefs.

Mai Saleh, a member of New Woman Foundation, commented on the controversy, saying, “Hala is definitely not the only girl who thinks in such a way, people are judging without looking at the reasons that led her to think in this way”.

The feminist activist said that Hala is suffering issues with marriage, a problem that is on the rise, due to common marriage problems in Egypt, adding that “we have a large number of single mothers in our country, with different situations, and there are a lot who think like her, because the decision to marry is not easy and negative experiences of marriage are everywhere around us.”

Regarding the social side, she said that anything unfamiliar to society is never welcomed. People only judge and never tolerate or show understanding of causes.

Her statement indicates that Hala is not the first female to think in such a way, with many girls preferring to remain single due to social stigmas and losing faith in marriage. “I think if it is allowed to have children without marriage through medical ways, many girls would go for this. Personally, I met girls who think in such a way but are not able to do so due to social taboos.”

Divorce rates in Egypt reached 2.2 cases per 1,000 people in 2015, which represents an 83% rise compared to the period 1996-2015, according to the Central Agency for Public Mobilisation and Statistics (CAPMAS).

Moreover, Amr Hassan, obstetric and gynaecology doctor, told Daily News Egypt that he has never met a case like Hala where partners agreed to get married only for children, but no doubt that the story has happened before.

He confirmed that a lot of girls go to doctors to freeze their eggs, until they get married, in case they get married at an age that does not allow them to have children.

Freezing eggs is not something new to society and is in demand, especially for ladies who have suffered breast cancer and have not yet married, he continued.

The doctor mentioned that in western countries, there are sperms banks. Any women who want to have children without getting married can undergo artificial insemination, but this is not something welcome in our eastern and Islamic society.

Contrary to this, Islamic cleric Mansour Mandour voiced another argument, saying that Sabea Gar did not provide a solution to fear of marriage, but rather, encouraged women to do something that is against ethics and religion, affirming his rejection of Hala’s story.

“The aim of marriage is stability, love, mercy, and calm. If one of these goals are not met, the marriage is void,” he said, commenting on the kind of marriage portrayed in the series.

In a group discussion with girls in their mid-twenties, some supported Hala’s argument and stance, accepting her reasons, while others viewed her as selfish, not thinking of providing her child with a normal life like any other. At the same time, others defended their rejection of the idea citing religious arguments.

“I support her. She did not do anything wrong. I also don’t believe there is something called ‘exceeding the marriage age’. Really, this frustrates me. Hala has an aim, she wants a baby, and this is her right, and she did not abuse the man to have baby, he agreed. Actually, most girls are getting married to have babies and can end up divorced, so where is the problem?” Hanady El-Hajeri, 25 years old, asked.

On the other hand, Amira Abdel Latif, disagreed with Hala, saying that she believes that if someone wants to have children, this should happen through traditional means, because “having a baby from someone I know well is much better than having a baby from someone who I know almost nothing about. The child should be born in a very normal atmosphere surrounded with the love of his parents.”

Single mothers are not a new phenomenon in Egyptian society, as previously there was the case of Hadeer Makaqi who was known as the first single mother on social media when she appeared telling her story of marrying under customary law and getting pregnant, yet her husband divorced her before she delivered the baby. Another movie named Ashtery Ragel (Buy a Man, 2016) also told a story of women who wanted to marry a man just to have baby, after failed attempts of finding the right person. This movie was also met with criticism over its idea of not supporting traditional marriage