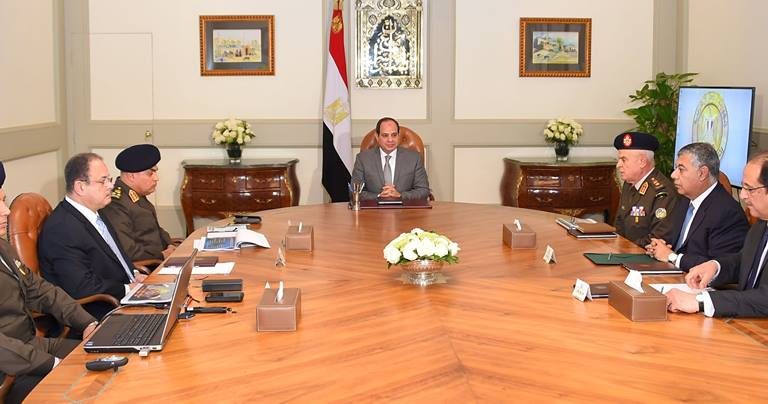 President Abdel Fattah Al-Sisi met Wednesday with the minsters of defence and military production and interior, where they reviewed a recent report about the security situation in North Sinai.

An army spokesperson published footage showing the ministers exiting a helicopter, hours after the airport was attacked by rocket missiles.

The two ministers were on tour to inspect army forces and police stationed in the security sectors of North Sinai, when Al-Arish airport was targeted with a rocket missile, killing one officer, injuring two others, and causing “partial damage to one helicopter.”

According to a statement posted on the spokesperson’s page, the army forces and civilian police “dealt with the source of fire” and swept the surrounding area.

No group has claimed responsibility for the attack.

Since 2013, state security forces, represented by both the army and the police, have been engaged in violent clashes with Sinai Province group, known previously as Ansar Beit Al-Maqdis. In 2014, the group declared its affiliation to the Islamic State group and launched deadly attacks on army and police checkpoints.

Over the course of the last two years, the armed forces launched counter-attacks against militants across the Sinai Peninsula, where the group is based, particularly in the cities of Sheikh Zuwayed, Rafah, and Al-Arish.