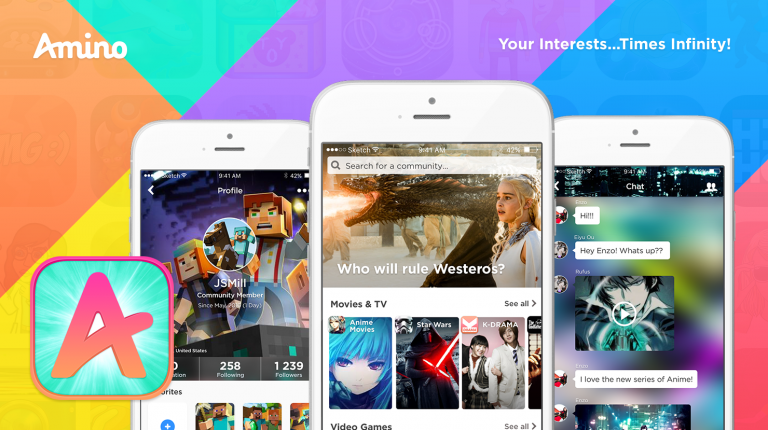 Amino, an application that fosters communication between people, plans to collaborate with Egyptian and Middle Eastern media organisations to develop the content it provides. Amino is the first mobile platform to connect people with shared interests to media organisations.

The app allows people to join or create communities of specialised interests that are all linked internally.

The application provides a powerful toolkit for volunteer leaders, and provides users with a rich set of features and functions including chat (text and video), blogs, surveys, tests, and more.

According to Amino’s General Manager Carl Madi, the website was launched in 2015 in English, followed by Arabic, Russian, Spanish, among other languages, afterwards.

Madi said that the application is an electronic platform to connect people of common interest to each other. The application includes hundreds of thousands of forums that fit the hobby of every Amino user such as football, series, movies, songs, women, and other forums.

He noted that users can share information and write articles themselves through the app.

Amino users can interact with each other, create friendships with people from around the world who share the same interests, participate in discussions on important topics, become part of an integrated community of common thinkers, and use it as a platform for self-expression and identity.

Madi’s role at Amino is to increase its user base and strengthen business partnerships with organisations and brands.

Chief Strategist for Companies and Marketing at Amino Sarah Moawad said that the app is different from social networking sites, as Amino is charactersed by a cohesive e-community, helping users expand their social circle and meet new people to share knowledge and information.

She noted that users spend an average of 70 minutes using the app, adding that the team is constantly communicating with its users and forum leaders and trains them to write articles and content properly and professionally.

According to research studies, the average time users spend on Facebook is about 50 minutes, while they spend about 30 minutes on both Snapchat and Twitter.

Moawad also said that the app is now studying the market in Egypt and the Middle East to cooperate with various media organisations to develop content for Amino.

Madi said that the app was able to attract a large segment of users, with the number of downloads reaching 1 million in the Middle East, while it reached more than 15 million downloads worldwide.

He noted that the team is focused on the Egyptian and Saudi markets as well as the Iraqi market, especially as there are nearly 40m smartphone and internet users in the Middle East and these are the largest markets in the region.

He pointed out that Amino is expecting three-fold growth in the Middle East and Egypt in 2018, as the Arabic website is launching in the first quarter of next year.

He added that one of the most important criteria for evaluating the application is the time users spend communicating on it, indicating that the longer time, the more the evaluation increases. Amino has also launched hundreds of thousands of forums this year for users to write and publish articles.

On how to earn profits through the application, Madi said that he is not focused on revenues now as much as on attracting new users in the Middle East and the world.

He said that the main obstacles facing the application are the difficulty of attracting experts to write solid Arabic content, adding that the team is working to establish partnerships with companies and individuals to write strong content.

Slow internet service is the second challenge facing the Middle East team. The third challenge is internet users only sharing articles, while Amino seeks to push users to write for themselves.