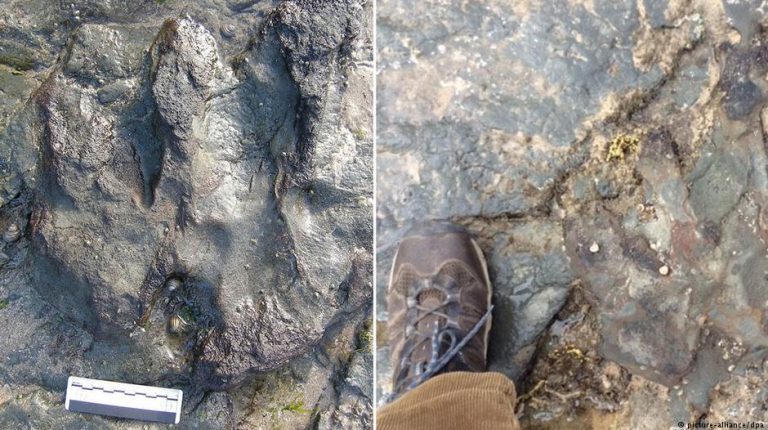 Vandals have taken a hammer to a 115 million year-old dinosaur footprint at a world renowned site in Australia, with officials Wednesday slamming the “sad and callous” act.The footprint of the medium-sized theropod was found by palaeontologists in 2006 at Flat Rocks in Victoria state – one of only a handful of polar, or ice-age, dinosaur sites in the world. Last week officials discovered it had been deliberately damaged as they took a school group to see it. “It is sad to think a person or persons who knew the location of the footprint would deliberately damage an important local icon that is recognised as being of international scientific significance,” said Parks Victoria ranger Brian Martin.

Soon after its 2006 discovery palaeontologists made a silicon rubber mould of the find. But rather than remove and store it at a museum, they decided to leave it in the rock, so visitors could have the thrill of seeing it in its natural state. It is located at an area known as the Dinosaur Dreaming site within the rocky Bunurong Marine Park, discovered in 1991 and which has yielded thousands of bones and teeth. Parks Victoria said the footprint was significant as it represented a moment frozen in time when a meat-eating dinosaur stood on that spot.This differs from the recovery of bones from fossil layers in the area that have been deposited there by ancient fast-flowing rivers. Mike Cleeland, from the Bunurong Environment Centre, said he hoped the footprint could be repaired. “The thrill of seeing a real dinosaur footprint has been diminished with the callous act of vandalism,” he said. “Fortunately, I was able to retrieve some of the broken pieces of the footprint and hopefully the technicians at Museum Victoria may be able to restore the footprint to some degree.”