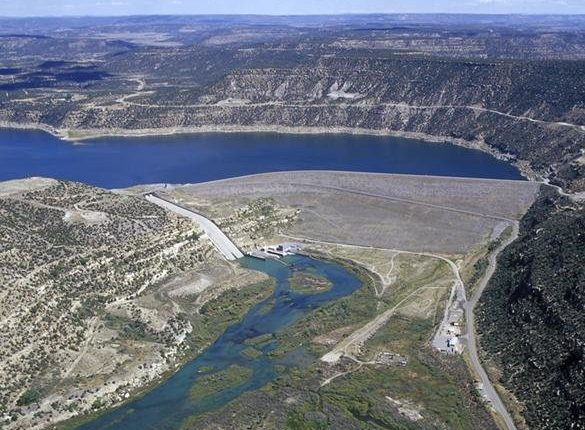 Thousands of dams were built along rivers and streams all over the world over the past century. Those dams provide electricity for homes, store water for agriculture, and support recreation for people. Recently, scientists have found that they also reduce the amount and change the timing of flowing water that fish rely on for spawning, feeding, and migration.

A team of researchers from the University of Washington (UW) investigated an emerging solution to help achieve freshwater conservation goals by re-envisioning the ways in which water is released by dams. The hope is that “designer flows” downstream from dams can be tailored to meet the water needs of humans, while simultaneously promoting the success of native fish over undesirable invasive fish species, according to the study.

To get to their approach, researchers examined in their paper, published in Nature Communication, the designer flow concept in the San Juan River, a major tributary of the Colorado River that flows through parts of Utah, Colorado, Arizona, and New Mexico. Every drop of water is significant in this arid landscape, and along the river’s roughly 380-mile length, the mighty 402-foot Navajo Dam is impossible to ignore. The river is home to at least eight native fish species, but over the years a number of invasive fish species have also taken up residence, including predatory channel catfish, red shiner, and common carp.

This method can guide water management in any river with large dams, said the senior author Julian Olden, a UW professor of aquatic and fishery sciences. He added that it is particularly relevant in more arid regions of the American Southwest, where water is at a premium, but major rivers like the Columbia or the Mississippi, which are similarly peppered with dams, also could have their dams programmed to release water in ways that aim to benefit both humans and freshwater ecosystems.

“Rapidly changing water availability demands new dam management strategies to deliver water downstream that balances human and ecosystem needs, so, the question is whether designer flows can be engineered to meet human water demands, and take advantage of mismatches between native and non-native species’ responses to flow to provide the greatest conservation benefit,” said Olden.

By integrating multiple decades’ worth of data about dam operations, river hydrology, and fish species into a multi-objective model, the researchers were able to identify specific water-release schedules that benefited native fish over invasive fish, while still ensuring that all of the domestic and agriculture needs that rely on San Juan River’s water are met.

“We were also pleased to discover that our model predicts that the ecological benefits of designer flow releases do not evaporate during times of drought,” said Olden.