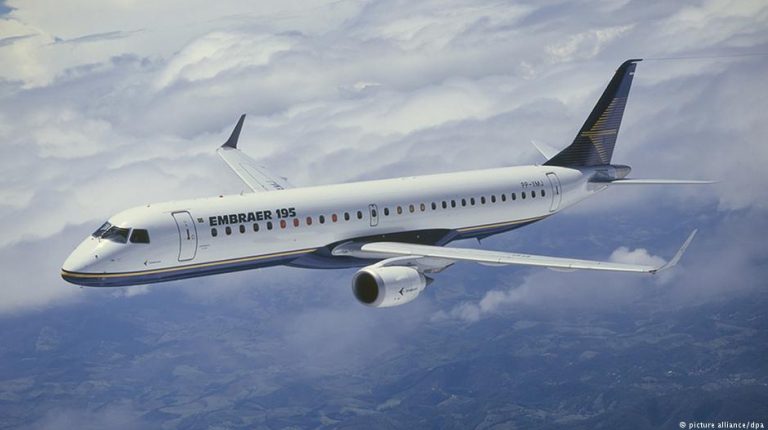 Shares in Brazil’s Embraer have soared 20 percent after Boeing confirmed it is in talks to merge with its smaller rival. But the Brazilian government, which is a shareholder, is lukewarm about any possible takeover.Boeing and Brazil’s Embraer confirmed late on Thursday they are in talks on a “potential combination” that would allow the US aerospace giant to compete with other rivals in the 70-100 seat jet market.

Embraer, who in 2016 had revenues of $6.2 billion (€5.2 billion) , manufactures commercial, military, executive and agricultural aircraft, and already collaborates with Boeing on the KC-39 military plane. They also work together on runway safety and alternative jet fuel projects, among others.

Boeing — who notched revenues of $96 billion in the same year – is keen to fill a gap in its fleet with regional single-aisle planes made by Embraer. But some analysts warned the tie-up would not necessarily be a good fit for the Brazilian firm’s Executive Jet and Defense divisions.

The latest discussions follow two previous attempts by Boeing to buy Embraer, which were rejected by the Brazilian government, which has a veto over any change of ownership despite the planemaker’s privatization in the mid-1990s.

Although Brazilian President Michel Temer is focused on reducing the state’s interest in several industries, he has ruled out a full foreign takeover of Embraer, one of the countries flagship companies.

Unions have meanwhile warned that the jobs of 16,000 people employed by the Brazilian firm would be at risk from any deal, and the steelworkers’ union in particular has vowed to veto the sale.

The C Series is a direct competitor to Embraer’s biggest E-jets, and the planes are at the center of an ongoing US trade dispute with Canada sparked by a Boeing complaint against Bombardier.

Embraer’s shares rose more than 20 percent in New York and Sao Paulo on the news, first revealed in the Wall Street Journal, to close at $24.42.

Airbus delivers 718 aircraft to its customers by end-2017