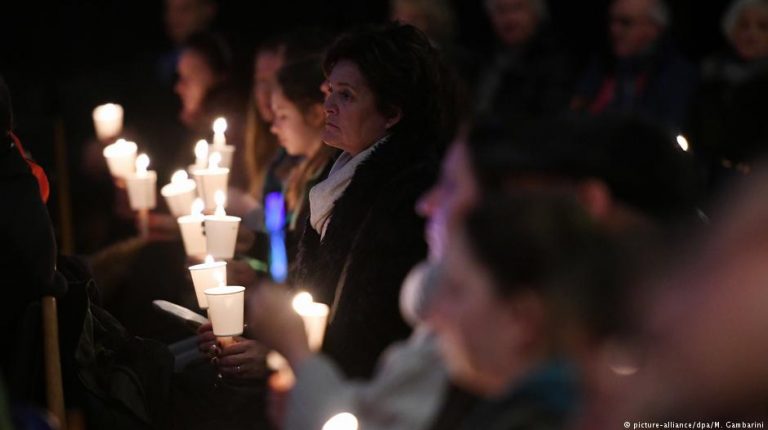 Berlin is in turmoil. DW columnist Gero Schliess fears that the terror attack on the Breitscheidplatz Christmas market and the recent anti-Semitic protests have had a destructive impact on the city.”Death to all Catholics!”

Oh god, such a hate call, and right before Christmas? Imagine if crowds of people wished for your and your religious community’s death just before you were to go to midnight mass.

This is exactly the comparison a Berliner Jew gave to me when I asked him about the anti-Semitic protests held in front of the Brandenburg Gate just before Hanukkah.

Like many other Berliners, he had to watch as protesters, most of them Arabs and Palestinians, reacted to US President Trump’s decision to recognize Jerusalem as Israel’s capital by incited hatred against Jews and burning the Israeli flag.

That happened just before Hanukkah, the traditional Festival of Lights, which commemorates the rededication of the Second Temple in Jerusalem.

The Jewish holiday was also celebrated in Berlin, with a huge eight-armed chandelier illuminating the Brandenburg Gate.

That’s why I now have to think of Christmas.

I’m trying to imagine: how would I feel as a Catholic if a similar scene would occur right in front of St. Hedwig’s Cathedral on Christmas Eve? How would I react if on my way to Christmas mass I’d have to squeeze through dozens of police cars and hundreds of police officers? That’s what Jewish citizens had to do when they celebrated their ceremony of lights for Hanukkah, on the exact same location where anti-Semitic protests were held a day previously.

I discussed the matter with Berlin-based painter Yury Kharchenko. He’s faced anti-Semitism his entire life, he told me. That was also the case in Düsseldorf, where he previously lived and studied. He was once beaten by neo-Nazis there. “Still, I found that the Brandenburg Gate events were hardcore,” he said.

Berlin is in turmoil, even though the religious calendar calls this to be a period of peace and contemplation.

It’s not just about the anti-Semitic hate speeches. There is another event that unsettles Berliners: the first anniversary of the terrorist attack on the Christmas market Breitscheidplatz.

There was a commemorative ceremony held with the relatives of the 12 victims along with the German president, the chancellor and the mayor of Berlin. They inaugurated a memorial, a golden crack in the ground in front of Berlin’s Kaiser Wilhelm Memorial Church, representing the broken hearts of the survivors and relatives of the victims of the terrorist attack.

Not a merry Christmas for the victims’ families

The pain is huge, and it hurts even more on this first anniversary. The victims’ relatives are bitterly disappointed by the Chancellor. They wrote an open letter to Chancellor Merkel criticizing her government’s management of the Islamist terror threat and reproaching her of not having expressed her personal or written condolences to them.

The Polish family of the murdered truck driver also told DW they were disappointed with Germany.

With the commemorative ceremony, Angela Merkel demonstrated that she recognized her mistake. But she didn’t apologize, at least not publicly.

I know, the terrorist attack and the anti-Semitic protests are not comparable. Still, both did something to Berlin. The city is no longer the same. Berliners have discovered a feeling of fear, vulnerability, powerlessness — and perhaps their own imperfection.

That’s not the stuff Christmas is made of, don’t you think? In any case, it’s not the romantic baby-in-a-manger version of it. Those aren’t the times we’re living in, neither in Berlin nor in many parts of the world.

Just in time for the commemoration of the terror victims, the Light of Peace from Bethlehem has reached Berlin (top picture). Over 500 scouts brought it into the city. Berliners have greeted it as a symbol against terror and violence.

It can clearly be felt. A crack has formed in Berlin, in the heart of this city. But maybe the peace light can help. I’m hoping for its healing effect.