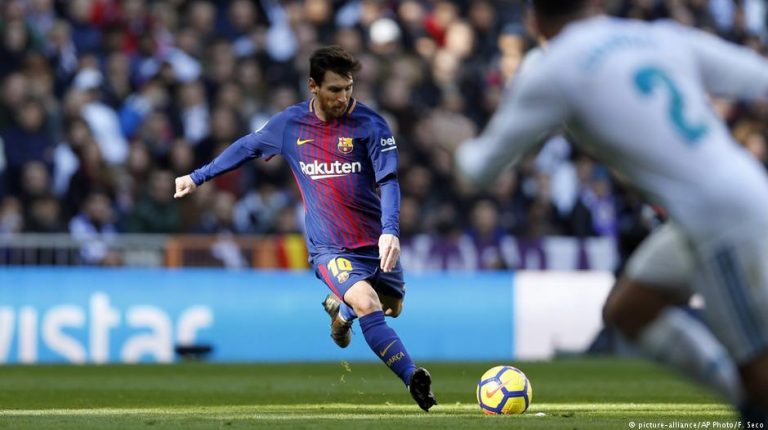 Ernesto Valverde’s men secured a massive result as they managed to beat their archrivals Real Madrid 3-0 at the Bernabeu. Lionel Messi scored the second goal, overtaking Gerd Müller as Europe’s top scorer for one club.Real Madrid were the better team in the first period of the game, with a Ronaldo goal being rightly ruled out for offside in the first minute. Barcelona’s style of play is renowned for having the ball most of the time, but the home side were the ones who had ball during 55 percent of the first twenty minutes.

Barcelona’s first chance came in the 29th minute as Messi lobbed the ball beautifully to Paulinho, whose shot was saved by Real keeper Navas. The Brazilian midfielder was close once again in the 37th minute as he headed the ball towards the home side’s goal, forcing Navas to make another great save.

Benzema also had a big chance to give Real the lead after Marcelo crossed the ball into the box, but the French striker’s header had hit the post. 0-0 was the halftime score.

Despite Real’s domination, it was the hosts who drew first blood as the second half kicked off. Rakitic and Sergi Roberto teamed up in attack, and the latter passed the ball across the box to Suarez, who easily scored from short range. 1-0 Barcelona.

Ten minutes later and Barcelona doubled their advantage after Real defender Carvajal handled the ball in the box, triggering a sending-off and a penalty, which Messi scored with ease.

Messi’s goal was of historic importance as it meant he officially overtakes Bayern Munich’s Gerd Müller as Europe’s all-time top scorer for one club. It was the Argentinian’s 526th goal for Barcelona, while Bayern’s “der Bomber” has scored 525.

Barcelona’s German goalkeeper produced one of the match’s best saves after Welshman Gareth Bale received the ball inside the box, with the former Gladbach shot-stopper brilliantly keeping out Bale’s shot from close range.

Real’s misery was tripled in the 93rd minute as Aleix Vidal scored Barcelona’s third after a Messi assist. 3-0 was the final score.

The Catalans lead Spain’s La Liga by a gap of nine points, while Real Madrid have dropped to fourth.