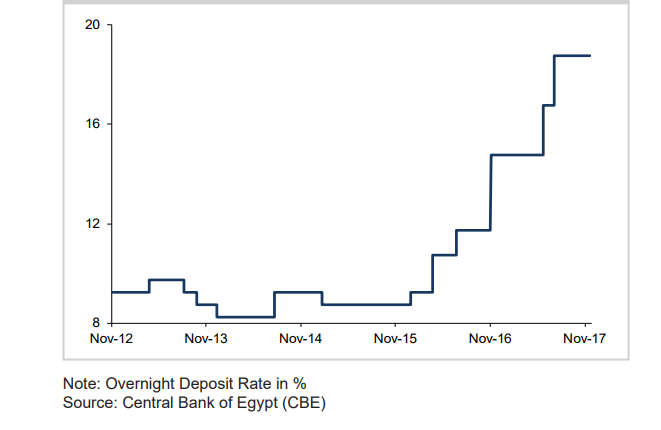 FocusEconomics Consensus Forecast panellists expected Egypt’s overnight deposit rate to end 2018 at 14.79% and 2019 at 12.08%, according to FocusEconomics report for December.

The next monetary policy meeting of the Central Bank of Egypt (CBE) will be held on 28 December.

The report said that, at its 15 November monetary policy meeting, the CBE kept interest rates steady for the third consecutive meeting, following substantial monetary tightening earlier this year to keep inflation in check.

The report noted that the move came after inflation fell for the third consecutive month in October, as the impact of substantial fuel and electricity subsidy cuts in June and July began to fade.

The report added that core inflation also dipped for the third month running. However, headline inflation remained excruciatingly high at over 30%, far above the CBE’s 10-16% target band.

In addition, the economy sped up in quarter four (Q4) of fiscal year (FY) 2016/2017, recording the fastest growth rate since September 2015, while the unemployment rate has fallen significantly over the past 12 months. This could fuel price pressures going forward.

Because of these factors, the CBE decided that it was too early to begin loosening monetary policy, and opted to keep the rate in place to ensure that inflation continues to decline towards the target.

With inflation set to fall as the impact of the government’s reform measures lessen, the CBE is likely to start reducing rates over the next year to support the economy, according to FocusEconomics.

Further, the report pointed out that the Egyptian economy continues to recover and growth reportedly picked up for the fourth consecutive quarter, July-September.