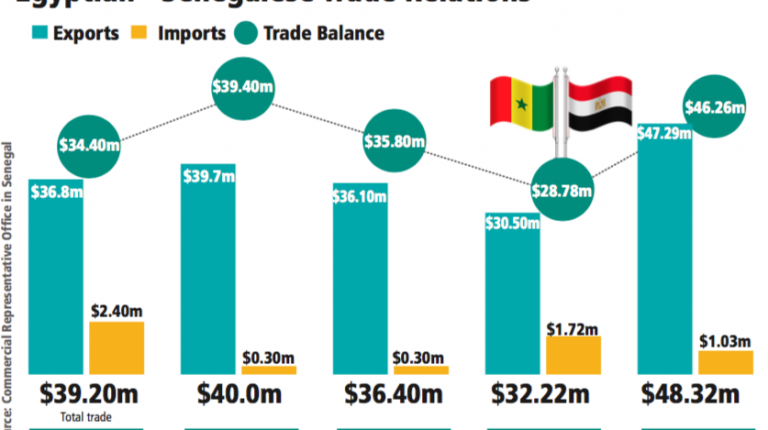 The Egyptian Embassy in Senegal is negotiating with the Federation of Egyptian Industries (FEI) to organise promotional missions by Egyptian companies from all industrial sectors to promote investment opportunities in Senegal.

Israel is the political rival of the Egyptian market, but Iran, Turkey, and China are the economic rivals, Egyptian Ambassador to Senegal Moustafa El Kouny said in an interview with Daily News Egypt on the sidelines of the Dakar International Trade Fair (FIDAK 2017), which started on 15 December and is due to end 31 December.

What is the role of the Egyptian Embassy in developing Egyptian-Senegalese relations both politically and economically?

Egypt was the first country to recognise the independence of Senegal during the rule of late leader Gamal Abdel Nasser in 1960 and was one of the first countries to establish diplomatic relations with Senegal, which explains the close ties that bind Egypt to Senegal.

Senegal is one of the most politically and educationally connected countries to Egypt, as Al-Azhar Al-Sharif is a focal point in the consolidation of Egyptian-Senegalese relations

A religious mission from Al-Azhar, composed of 37 religious men, was also sent to 40 religious leaders in 2018 to confront Shiite and Salafist tendencies and spread moderate Islam,

The number of Senegalese students studying in Al-Azhar has reached 600, about 30% of whom were awarded scholarships

Egypt also helped restore Senegalese cultural heritage and Islamic manuscripts, as well as giving them some traditional, not original, antiquities, amounting to 26/27 artefacts for display in the Egyptian pavillion at the Museum of African Civilisations, which will be opened by the end of 2018.

What is the value of trade exchange between Egypt and Senegal?

The trade exchange value between Egypt and Senegal reached $48.3m last year, compared to $30m during the same period of 2015, according to data from the International Trade Centre (ITC).

What are the most prominent Egyptian products exported to Senegal and our main imports?

Meanwhile, Egypt imports fish only from Senegal and Egyptian garment companies should manufacture African robes, which are manufactured by Turkey and China at competitive prices. Africa is the future of Egypt and not Europe or Arab countries.

What are the countries that compete with Egypt in the Senegalese market, especially with the trend to increase trade between the two sides?

The Senegalese market is open, it’s time for Egyptian companies to be there.

China and Turkey are Egypt’s main competitors in the field of infrastructure and participated in the construction of the new international airport in Senegal, as well as the economic and administrative capital of Senegal, followed by France and Iran on the commercial level.

What is the volume of Egyptian investments in Senegal?

There are nine Egyptian companies operating in Senegal in the fields of infrastructure, telecommunications, public trade, and agriculture. There are no accurate statistics on the volume of mutual investments. Senegal invests in Egypt through two companies in the services sector.

Since 2010, Egypt has signed about 10 agreements and memoranda of understanding for commercial facilitation with Senegal, but they are not activated. What are the reasons for the disruption of implementing these agreements?

There are no disruptions and these agreements are in place, but the current circumstances in the region require a trade group rather than bilateral trade agreements. This is what happens through the negotiation of the Economic Community of West African States (ECOWAS) agreement which includes the west African countries. Therefore, bilateral agreements are not useful any more for trade and economic relations between two countries.

Are there currently agreements for bilateral  projects between Egypt and Senegal in the coming period?

Egypt is the largest African country for the production of fish resources, so Senegal should benefit from the Egyptian experience. There is a Senegalese desire to bring the quality of the bory and tilapia fish to Senegal.

Egypt is trying to enter into a trade agreement with the ECOWAS countries. What have the negotiations reached?

Through the ECOWAS headquarters in Abuja, Nigeria, the agreement is being negotiated and there is no alternative to joining this economic bloc. Egypt has also proposed the establishment of the African Free Market through the implementation of an agreement that includes all African economic blocs, such as Common Market for Eastern and Southern Africa (COMESA), Southern African Development Community (SADC), and East African Community (EAC), as an Egyptian initiative.

As for the ECOWAS agreement, separate for west African countries, which is currently under discussion, this bloc would be beneficial for Egyptian products, as the volume of trade exchange with the ECOWAS countries reached $320m. There are several countries seeking to be key members of the gathering, such as Morocco, which has officially submitted an application to the Arab Maghreb Union (UMA) to join ECOWAS.

Does the embassy coordinate with Egyptian business organisations to increase Egyptian investments in Senegal?

The embassy coordinates with the FEI to send commercial missions to Senegal, especially as major Egyptian companies, such as Elsewedy Electric, have expressed their desire to invest in Senegal in the field of electric power and in a metre factory in one of Senegal’s economic zone and its administrative capital. Several negotiations and innovations are under way for this purpose, in addition to the Arab Contractors Company seeking to enter infrastructure projects in Senegal.

With this development in Senegal’s economic growth, are there any incentives offered by the Senegalese government to foreign investors?

Of course, there are incentives provided by the Senegalese government to foreign investors, including tax exemptions ranging from 5-10 years, depending on the size of the project, and granting easing to obtain industrial and investment land and having the right to use or own it.

With regard to El Nasr Export &Import Co., why was its branch in Senegal closed, and is there an attempt for it to return to work again soon?

The company’s branch in Senegal is scheduled to reopen at the end of this month to be operational in 2018, which we hope will contribute to the development of trade between Egypt and Senegal.
The return of the company once again demonstrates the Egyptian government’s serious endeavours to be present in Africa.

What are the Senegalese government’s impressions of the Egyptian government’s procedures for economic reform?

The Senegalese people believe that Egypt has taken practical steps towards economic reform. Senegal is one of the largest African countries with high economic growth rates of 6.7%, along with Rwanda. There is also interest in the mining industry, especially phosphate and gold. Senegal is witnessing strong competition between oil companies, as it was discovered that there are promising opportunities for the discovery of oil and gas in the country, including the British Petroleum company (BP), the Italian company Eni, and an Australian companies.

Senegal’s presidential election are upcoming, so Senegalese President Macky Sall will be keen to pay attention to projects and economic development in the coming period.

Iran, Turkey, and the interests game