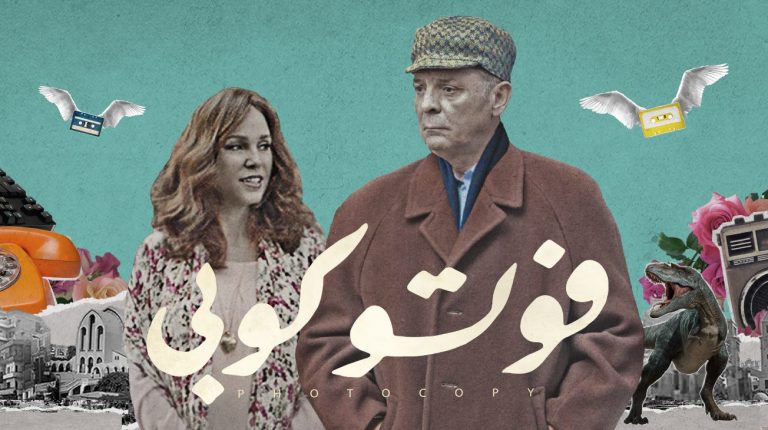 Through a wonderful mix of videography, local history, and music, Photocopy director Tamer Ashry takes us on a wonderful journey in time.

The film is imbued with Faried el-Atrash songs and scenes of the culturally rich and relatively old Abdo Pasha area of Cairo, with its old-fashioned “gad3ana”—the remains of a good trait in Egyptians who had each other’s back at all times.

The Abbasiya scenes were definitely a breath of fresh air and a change from the, although good, now-familiar downtown scenes which have become all too common in many of the recently produced Egyptian films like El-Asleyeen and El-Kenz.

The beautiful decoration of the balconies and wonderful lighting throughout the film definitely raise its aesthetic and make up for some other areas where the film may have come short.

It is beautiful to stop and enjoy life as the older Ustaz Mamoud (Mahmoud Hemeda) and Sett Safiya (Shereen Reda) do. A good movie, a red rose, a compliment, and someone to read for you when you can’t find your glasses are moments to cherish in the film and in life.

But it came out rather slow, heightened by our awareness that maybe Shereen Reda was not the best fit for the role. A beloved actress, Shereen did her best to play the role of an elderly woman, despite her forever-young self. She may have been selected specifically for the scenes where she reminisces about brighter days and puts on her crimson dress, but perhaps the rather unnatural acting could have been otherwise improved.

At the same time, she warmly let us into the private world of a woman who has suffered breast cancer and her feeling of being incomplete—an area that was probably never tapped into in Egyptian cinema before. And it’s lovely just how Ustaz Mahmoud makes her feel beautiful by telling her that, to him, she is still beautiful and shows her the true understanding of a what a woman and companionship are all about.

There may have been some unrealistic exaggerations in some scenes, like the fact that her absent son throws her out of the apartment when he finds out she was being courted by a man. Some rage may be foreseeable, but to send his mother on the streets is a bit far-fetched within the Egyptian middle class.

Yet, the slow rhythm, and other minor cons, were overridden by Mahmoud Hemeida’s great characterisation and acting, and the wonderful and essentially Egyptian sense of humour that stretched along the movie.

The contrast between the young and old in Photocopy was a point to think about and laugh hard at, with the young Abdelaziz telling Mahmoud about Valentine’s, and the outstandingly talented acting of Ahmed Dash. The highlight was when Mahmoud, or geddo (grandpa), as the younger ones will call him when he decides to go to a cyber café to look up why dinosaurs went extinct and becomes a laughing matter for the whole frivolous video game generation on the spot.

By the end of the film, however, Mahmoud fully embraces the contradiction and fun in this situation, joining the young ones in laughing at it, and letting them teach him how to play “bazooka” or Warcraft video games with them. He totally overcomes and even celebrates the gap instead of letting it stand between him and the younger ones, which is mostly the source of beauty in this film. It is fun, and in the process, gives you some subtle, but profound ideas about how to live and enjoy life.

For indeed, what is life but a good breakfast in the balcony in the warm company of someone like Sett Safiya, who you are comfortable around, or as some may call it, someone you love!

How to obtain a personal loan from Banque du Caire?