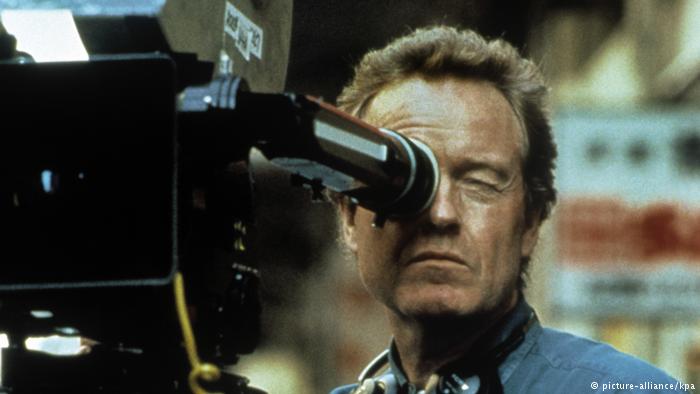 After American actor Anthony Rapp accused Kevin Spacey of abusing him three decades ago, and a number of other sexual abuse allegations surfaced against him, Ridley Scott cut all of Spacey’s scenes in All the Money in the World in November and recast the role to Canadian actor Christopher Plummer. The unprecedented move did not jeopardise the December premiere of the movie and both Plummer’s appearance and the crime drama have received good reviews.

His films burst with visual power and opulence, and even his more minor films boast stunning cinematography. In his best works, visual style and narrative depth complement each other perfectly. Ridley Scott, born in 1937, is an image magician—and has given modern cinema some unforgettable moments. He is pictured here on the set of Black Rain (1989).

Debut with histrorical drama: The Duellists

In 1977, Scott was 40 years old and making television shows and ads, so no one expected that he would become one of the most sought-after directors in world cinema. But his feature film debut that year, The Duellists—a story of two officers during the reign of Napoleon—showcased Scott’s special talent: sumptuous images, a distinct visual style, and cinema for all the senses.

Shock on the big screen: Alien

The film to follow went to a whole new level: Alien was remarkable in its perfect combination of science-fiction and horror, complete with breathless suspense, bold cinematography, and Oscar-winning special effects. For the first time, a woman (Sigourney Weaver) was the lead in an action movie. Alien went on to inspire a new generation of sci-fi thrillers.

Ridley Scott went one better with the 1982 dystopian sci-fi film Blade Runner, which featured more fantastic visuals and unique neo-noir atmospherics. Harrison Ford entered cinema history in his role as a replicant-hunter, and few films have inspired so many imitators—a sequel was also released in 2017. The original Blade Runner remains one of the greatest cult films of all time.

After excursions into fantasy, action, and thriller, Scott landed another coup in 1991 with Thelma & Louise. The story of two very different friends who just want to escape their dreary everyday lives becomes a wild road movie stretching across America. It was another film with strong cinematography and a quirky story that also featured Brad Pitt in a breakout role.

Almost a decade later, Scott’s next major international success came with Gladiator, a grand Roman Empire epic. The blood and swords action drama won five Oscars (including Best Actor for Russell Crowe, who played the vengeful Roman general-turned-gladiator) and a nomination for Scott. It was another work with a compelling narrative and brilliant cinematography.

Following his trip to antiquity, the following year Scott released his first war film, Black Hawk Down (2001), and proved he was able to create breathless tension in yet another genre. Tracing an episode involving US soldiers during the 1993 Battle of Mogadishu in Somalia, the film also created controversy for its “airbrushed” depiction of American military involvement in a civil war.

Scott’s next project was the sequel to the worldwide hit The Silence of the Lambs. The serial killer Hannibal Lecter was in good hands with Scott, who pulled out all the stops in his return to the horror/suspense genre. Nevertheless, Scott struggled to replicate the massive success of the original Hannibal movie, and the 2001 film is today regarded as one of his minor works.

Scott took another trip into history with his 2010 action film Robin Hood, a potent re-imagining of the legendary story of the do-gooder who helps the poor. “Grown-up but not too serious; action-packed but not juvenile…[it’s] the Robin Hood movie we’ve been waiting decades for, it’s also Ridley Scott and Russell Crowe at their most entertaining since ‘Gladiator,'” said one critic.

Ridley Scott belongs to the handful of very powerful Hollywood directors who can freely choose their subjects and actors. So he proved with the A-list cast—Michael Fassbender, Penelope Cruz, Cameron Diaz, Javier Bardem, Brad Pitt—assembled for the British director’s 2013 drug thriller The Counselor. Top stars want to work with Scott. The film, however, received a mixed response.

‘House of Cards’ to end without Kevin Spacey

How films of the past envisioned the future