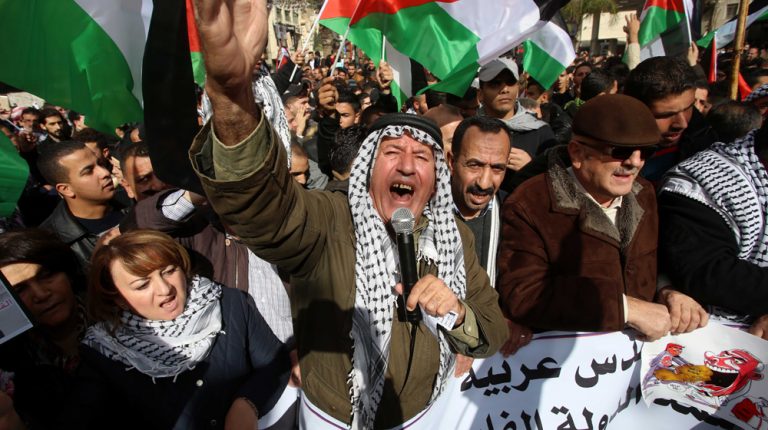 Controversy and protests have not ended 20 days after US President Donald Trump recognised Jerusalem as the capital of Israel and announced plans to move the American embassy from Tel Aviv to the city.

Demonstrations in different Palestinian cities have continued since, as local media reported violent violations by Israel’s occupying forces, especially in Jerusalem. According to the Palestinian Society Prisoners Club, 23 citizens were arrested in the West Bank on Tuesday dawn.

The NGO said this makes total number of Palestinians detained since the beginning of anti-Trump protests 610, including 170 minors and twelve women. Teenager Ahd Al-Tamimi remains in custody pending investigations.

Dozens of states voiced their rejection of the decision through leaders’ comments, condemnations at the UN Security Council meeting on 8 December, a majority of votes in favour of a resolution calling for the withdrawal of the decision on 18 December, and a UN General Assembly resolution against it on 21 December.

On the other hand, the US has had an escalating response, each time holding on to its decision: first by undermining international reactions, accusing the Palestinian Authority of standing in the way of peace negotiations, using its veto power during the 18 December vote, and most recently threatening to cut aid to states opposing its decision at the UNGA.

For its part, Israel continued to lobby for more support, telling European countries they should follow the US decision. Guatemala, one of the countries that stood with the US in the last UNGA vote, has now made a similar announcement.

President Jimmy Morales said, in a Facebook post Monday, that he gave instructions to his “chancellor” to initiate the return of the Guatemalan embassy to Jerusalem after speaking with Israeli PM Benjamin Netanyahu. Morales also published a photo with the flags of both states.

“This is just the beginning, other countries!” Netanyahu tweeted after thanking Morales.