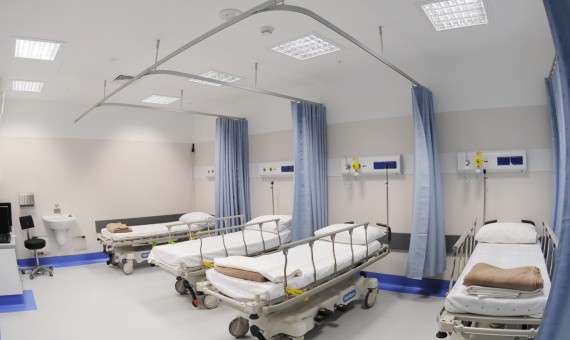 Although the state is putting great effort to see through the Comprehensive Health Insurance Law—which is considered one of the achievements of President Abdel Fattah Al-Sisi during his first presidential term— its articles and regulations are still not satisfactory for the majority of the members of Egypt’s Doctors’ Syndicate.

Parliament approved the controversial and long-awaited Comprehensive Health Insurance Law last week, is expected to be implemented in six stages, each comprising a number of governorates. The final stage will include Cairo, Giza, and Qalyubia.

The law made health insurance a mandatory system granted to all citizens, not excluding any category and making the coverage unit families and not individuals. The enforcement of the law and implementation of its executive regulations will take six months after the president ratifies the law. The system will cover treatment of all kinds of illnesses and diseases, though ambulance and birth control services will be excluded. It would also cover the cost of medical treatment abroad if such treatment is approved by a relevant specialised committee and it will not cover foreigners.

Hospitals affiliated with the army, police, or owned by the private sector, will not be included in the system, except certain cases stipulated in the law.

Despite the government highly praising the law and believing in its efficiency, it was rejected by the Doctors’ Syndicate and others for several reasons, top of which is the unclear mechanism of the law’s implementation, the 15-year deadline for all governorates to be covered without an alternative plan to deal with the 50 million citizens covered by the current insurance umbrella, and penalties for service quality.

The law is supposed to be implemented within a maximum of 15 years, beginning next year with the governorate of Port Said. The minister of finance previously said that the law will cover 40% of Egyptians.

In his recent interview with state-run Al-Ahram newspaper, Minister of Health and Population Ahmed Emad El-Din said that the president was regularly following up the draft law and requested a month ago the building of a strong law, providing sustainable financial coverage and better health quality than was presented before, so citizens can feel the change.

“We are preparing for this system. We have studied the experiences of the countries of the world. We have chosen the health insurance system enforced in Britain. In order for citizens to be fully aware of all the steps, I would like to point out that Egypt started studying the application of the health insurance law in the 90s and was planning to implement it, but there were always obstacles that prevent its implementation, especially political will, which was not enthusiastic enough for it to be implemented because of the lack of financial coverage,” said the minister.

Subscribers are the funders, unclear definition for underprivileged citizens

Article 40 of the law states that there will be nine sources of funding for the new national health insurance system, including “subscription fees, budgetary allocations, foreign and local donations and loans, contributions, and other sources, such as cigarette, food, and drug sales”. The article also stipulates that funding will come from cement and iron sales and from fees imposed on citizens when renewing driving licences and identity cards.

The new system will be funded by subscriptions and contributions of citizens and other entities, including private contributions, payments received through government services, and funding from the state treasury for the needy. The government will grant free services for families that are not identified by the Ministries of Finance, Social and Solidarity, the Central Agency for Public Mobilisation and Statistics (CAPMAS). This will be guided by the minimum government-declared wage at the national level, inflation rates, and adjusted periodically at intervals of no more than three years.

However, the Doctors’ Syndicate criticised the absence of articles stipulating wages for doctors and medical personnel. Emad El-Din responded to this saying that the salaries of doctors will be very “attractive and exceed the contracts of working abroad,”  but on the condition they are well-trained and hold high scientific degrees.

According to the syndicate’s statement, the new system does not mention any improvements in conditions of doctors and health service providers, only saying that employees who will move to work within the new system will retain their current incomes and functional benefits.

Khaled Amin, Doctors’ Syndicate representative for Giza, told Daily News Egypt that the new system will require doctors to intensify their work and use new equipment, but did not clarify what will be given to doctors in return, whether their salaries will increase, or if there will be bonuses.

“The issue is not only about the salaries, we even don’t know how the government will offer extra tools and equipment for the new service that will cost double what was used before,” Amin added.

Amin also said that new law does not properly define underprivileged citizens and how it would determine who will receive free service and who will not. He used an example, questioning why a citizen who receives a salary of EGP 3,000 is required to pay subscriptions to the system, while other workers, such as self-employed ones, or informal workers, will receive the service for free, despite them possibly receiving more money through their unofficial professions.

In this regard, MP Haitham El-Hariri suggested that underprivileged people should be determined in accordance to income, total expenditure, expenditure on services and health care, characteristics of family housing conditions, possession of household appliances, and means of transport and communications.

The minister commented on this, saying those who are unable are the families identified by a committee of the Ministries of Solidarity and Finance. However, he further said that individuals must submit proof to this committee to prove their underprivileged status. In the study of the draft law, it was found that this sector represents 30% of the population of Egypt and that they will not be able to pay financial contributions. They will not bear any financial burdens or pay contributions and the state will bear the fees, El-Din said.

Parliament’s Health Committee held constant meetings during the past few days to finalise the law. Members of the Doctors’ Syndicate were invited to attend community dialogues so their comments on the law could be heard. However, they input was not considered. Previously, Hussien Khairy, head of the Doctors’ Syndicate said in press statements that when they attended the sessions to provide their comments regarding some rejected articles, none of parliament’s members responded to their recommendations.

ACDIMA pumped EGP 671m worth of investments in 2017: minister of health and population

The e-Visa for Egypt: what are the basic requirements?