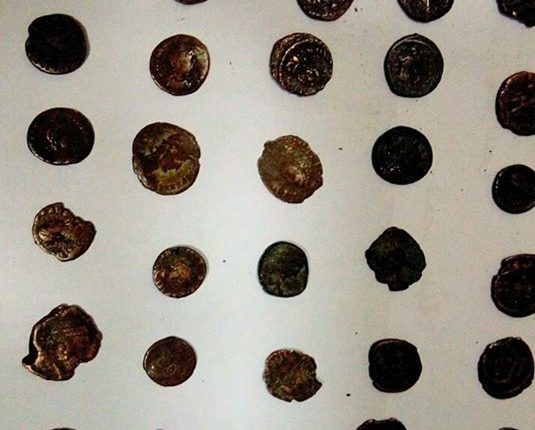 The antiquities outpost at Cairo International Airport seized 329 ancient coins with an Egyptian passenger attempting to smuggle them to France.

Ayman El-Ashmawy, head of the Egyptian archaeological department at the Ministry of Antiquities stated in a press release that the coins were proven to be ancient and date back to different eras.

Among the seized collection, 13 coins date back to the Byzantine Empire and 157 coins have carved drawings and inscriptions of Pharaoh Ptolemy IV Philopator, ruler Ptolemy V Epiphanes, and King Ptolemy VI Philometor. After studying the coins, they were found to belong to the Roman and Greek eras, displaying several carved logos, Roman writings, and sceneries of the era. Other coins were also found with images of several Roman emperors. Some of the found coins take the shape of emperors’ heads, while others are shaped like their signatures, rather than being round.

According to authorities, the coins were badly reserved, which is indicated through the unclear pictures carved on them and they require immediate restoration.

Photos of the seized coins show some of them rusted, while others are completely black due to lack of restoration.