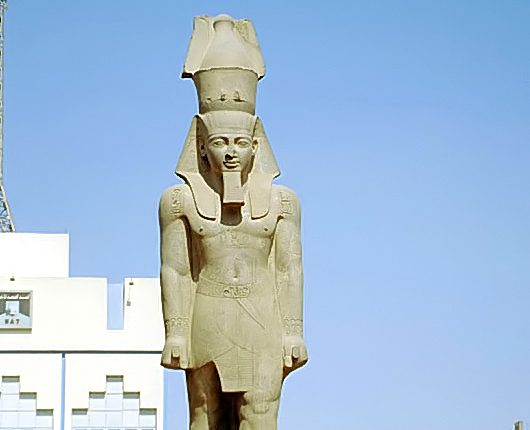 Minister of Antiquities Khaled El-Anany approved on Monday the final preparations for transferring the colossus of Ramses II to the final location it is planned to be displayed at the Grand Egyptian Museum (GEM), to be opened in 2018.

The statue is planned to be transferred from its current location in the GEM’s storage to its main hall, where it is set to be showcased.

In a statement published on the Ministry of Antiquities’ official Facebook page, El-Anany stated that the process of relocating the statue will be in a “majestic procession that suits Ramses II as one of the most important, great Egyptian rulers and also suiting the importance of the event”.

El-Anany added that the ministry wants to start the new year with a huge archaeological event, just like it ended 2017 with an important discovery; the unearthed tombs which were found earlier this month at the necropolis of Dra’ Abu el-Naga’ in Luxor.

Tarek Tawfiq, GEM’s general supervisor, stated that the transferring process is as important as the first one in which the statue was transferred from Ramses Square to the GEM in 2006, adding that the colossus will be the first artefact displayed at the GEM, ahead of the museum’s planned soft opening in 2018.

Tawfik explained that the final plan of transferring the statue is ready and El-Anany’s visit was to approve it and give the greenlight to carry it out, asserting that “the ministry will exert all possible efforts to accomplish the mission safely.”

The statue was transferred 11 years ago from its location in one of Cairo’s most crowded streets, Ramses, where it overlooked Cairo’s main train station connecting the capital with other governorates.

The relocation of the statue was spotlighted and followed by several national and international media outlets. The statue was moved from its original place in order to save it from pollution. It travelled 30 kilometres, at a rate of five kilometres per hour. The transferring process cost EGP 6m

The scene of the statue being lifted through Ramses Street went viral on local and international media portals, as its arrival marked the start of building the GEM.

A poet, a sculptor and a politician: Egypt’s rich yet often neglected modern history