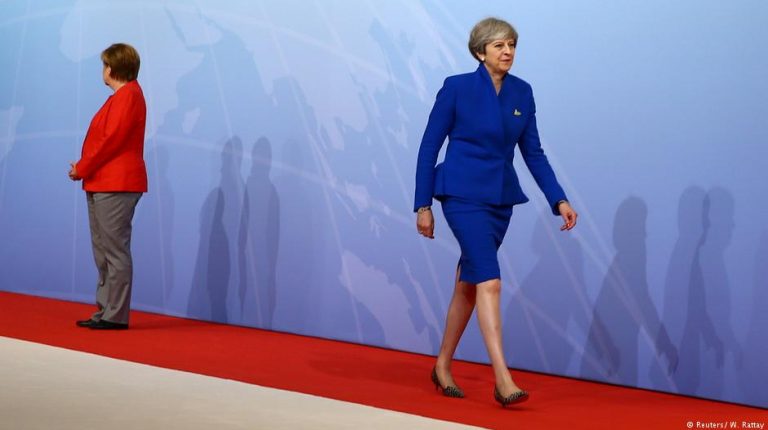 Despite the endless media coverage and fevered political rhetoric, no one yet knows for sure what is ultimately going to happen with Brexit. But should Germany really be scared of a messy outcome?Brexit means Brexit. At least that’s what UK Prime Minister Theresa May has told us several times. The problem with that is, 18 months on from the referendum, no-one seems to know what that crucial ‘Brexit’ bit itself means.

Hard, soft or medium-boiled? Rare or well done? Or, to borrow another impenetrable phrase of May’s — a ‘red, white and blue Brexit’?

With a year of difficult negotiations past and another one ahead, every outcome is still on the table, including what is surely the nightmare scenario for all parties — that in March 2019, the UK leaves the EU, the customs union and the single market without a deal, or with one that significantly changes the status quo.

Were that to happen, what would it mean for Germany? Europe’s largest economy has been inextricably bound to the continent’s second largest one for decades. A sundering is inconceivable. Yet out of a clear blue sky, it has emerged as a troubling reality that German business leaders, economists, trade unionist and industry representatives must face.

Driving down a lonely road?

“The complexity of the whole discussion is now beginning to be realised,” Ian Robertson, long-serving BMW board member and the group’s special representative in the UK, told DW. “Up until the first quarter of this year, I think there was an assumption that it was a relatively easy issue — we always knew it wasn’t.”

Most analyses on the impact a hard Brexit would have in Germany start with cars — and with good reason. There is no single item which Germany exports more than cars, which accounted for 11 percent of the country’s total exports in 2016 — at a value of €126 billion ($150 billion)

Of all those global car exports, a whopping 15 percent, or €19 billion worth, go to the UK. That makes Germany’s export trade in automobiles with the UK arguably the most important single element of its entire trade ecosystem.

BMW has a particularly big interest in avoiding a chaotic Brexit. The UK is the company’s fourth biggest market while it also has a strong manufacturing base in the country, with BMW-owned British brands such as Rolls-Royce and Mini still made in the UK.

A few weeks ago, UK native Robertson was part of a delegation which met Theresa May and he says the “encouraging” words he heard at that meeting make him think the likelihood of a hard Brexit is less than it was during the early months of this year. “But the work is still to be done,” he says.

The automobile industry within the EU is utterly dependent on the free movement of goods, with no two EU countries more invested in that intertwinement than Germany and the UK.

“There is a totally integrated logistics supply chain of components going into the UK and there is a logistical supply chain of finished products coming out,” says Robertson. “The thought of any impediment there would be logistically extremely difficult to manage and would be in no one’s interest.”

He specifically highlights the practical reality of what could arise at the Dover-Calais crossing, in the event of the UK leaving all the EU structures without a comprehensive trade deal.

“10,000 trucks a day go through those ports, of which 1,500 or 1,700 are automotive related,” he said. “As manufacturers, we all run factories with very ambitious logistics systems. You cannot put any checks at that border that wouldn’t interfere. I have seen a study that put a notional three minute delay on every truck on either side of the English Channel, and that would create 17 kilometers of tailbacks.”

Then there are the regulations and safety standards. Were the UK to adopt different standards to the EU — a real possibility, if the UK followed through with some of the current political rhetoric — it would place major extra costs on EU car manufacturers wishing to do business within the UK.

The year of not very magical thinking

For the wider faction of German manufacturing businesses, it’s regulations, standards and logistics that are of most concern.

Ulrich Ackermann, foreign trade specialist at the German Mechanical Engineering Industry Association (VDMA), which represents the country’s machinery manufacturing industry, has been dismayed by what he has seen so far from the British side in this regard.

“We expect that when they leave the EU, we will both come up with the same customs regulations and duty rates. Between the EU and third countries that is between zero and 4.5 percent in the machinery sector. Not so much,” he tells DW.

“But this technical question of applying the same standards and safety regulations in production could be much costlier than tariffs. Two weeks ago, in discussions with government officials from the UK side, I asked exactly this question: ‘What will you do?’ The answer was: ‘We will see what is positive for Great Britain and if it is possible to make our own regulations, then we will make our own.'”

“With this answer, you can do nothing,” he says with no little dismay.

To put in context the potential cost of the UK applying different regulations and standards to the EU in this industry, Ackermann highlights the situation with the US, where that country’s different standards add extra costs of between 5 and 18 percent.

He sees this kind of thinking elsewhere, particularly when it comes to talk about future trade negotiations between the EU and the UK.

Industry specialists have their own areas of focus, but as the chairman of the German Council of Economic Experts (RWI) — the special council that advises the federal government on economic policy — Christoph M. Schmidt keeps a very close eye on the macroeconomic side of things. He paints a stark picture of the pitfalls of a hard Brexit, both in Germany and beyond.

“The negative consequences would be most severe for the UK itself,” he told DW. “But the negative spill over to the German economy, one of the most important trading partners for the UK, would also be substantial.”

But it’s the long term effects that most concern him, particularly the way in which a hard Brexit would affect the “intensified division of labor” which shared EU membership has enabled European countries to embrace and benefit greatly from.

“Most importantly, the pragmatic, market-oriented British voice will be dearly missed in the future process of European integration,” he added.

The uncertain affairs of men and women

None of the consequences outlined by the experts here need ultimately apply, for Brexit — if and when it happens — may yet turn out to be on the bright side of the road.

In the “hard” scenario – whereby the UK leaves the EU, the customs union and the single market either without a trade deal or with a strict one – then the short and long-term economic consequences across a multitude of areas will be severe. Germany and other EU countries will pay a heavy price, but the UK it seems, would pay the heaviest.

For people like Robertson and Ackermann, whose professional lives would have been very different had it not been for the deep economic integration of the EU, the prospect of a hard Brexit is as difficult to fathom as it is to countenance. Yet as unthinkable as it is, it could still happen. To ignore it as a real possibility would be foolish indeed.

The scenario recalls William Shakespeare, an Englishman whose literary canon was as guided by the affairs of Europe as it was by his home island. “Since the affairs of men rest still uncertain,” he wrote in Julius Caesar, “Let’s reason with the worst that may befall.”