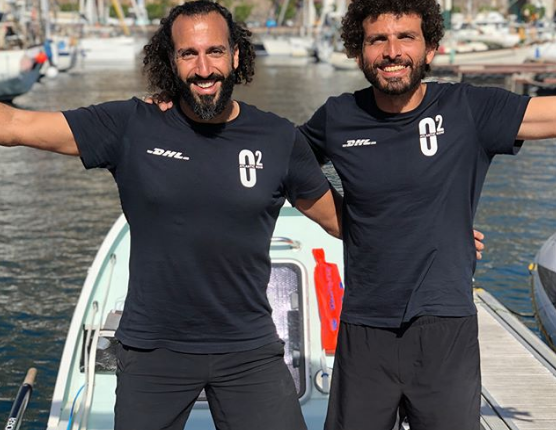 Only nine days after starting the world’s toughest rowing race, Egyptian team O2’s boat, consisting of adventurer Omar Samra and professional triathlete Omar Nour, was hit by heavy winds that capsized it, defaulting the end of their journey in the competition, according to a Facebook post on Samra’s official page.

The 45-knot winds caused their boat to overturn in the middle of the Atlantic Ocean, leaving the duo struggling to survive throughout rescue attempts that lasted for 12 hours.

“The team is now safe onboard a 200 metre Greek-German cargo ship that came to their aid and was able to bring them onboard after 3-4 hours of rescue attempts in worsening conditions,” Samra’s post said.

The perilous journey was part of an annual ocean-rowing race called the Atlantic Challenge. O2 was competing with 27 teams from 17 countries that descended on Spain’s La Gomera island this week to take part in the 2017 race.

Samra and Nour found out that the ship’s captain and senior officers are also Egyptians who offered them “generous support and hospitality.”

The ship is planned to arrive in Spain by December 28, and both Samra and Nour are expected to return home to Egypt before the new year.

“The past 24 hours have made it clear just how dangerous an expedition such as this can be,” Samra’s post added.

Before the start of the race, Nour and Samra had been preparing for the gruelling challenge for 10 months. Their preparation included high-intensity physical conditioning to morph their bodies into those of elite rowers—the athletes have added a combined 27 kilograms of body weight which they expected to lose over the course of the crossing, and had completed over 200 hours of rowing on their boat.

They also completed courses in First Aid at Sea and Sea Survival classes.

Before the start of the competition, Samra expressed his awareness of the highly dangerous circumstances O2 team might face, saying, “there will be challenges along this incredible journey—when you’re faced with 50-foot waves, blisters, salt rash, and sleep deprivation, that’s a given! But we’re as ready as we can be, and excited to get out there and show the world what you can do if you set your mind to it,” he said.

The boat was named ‘Jan’. It was 7.5 metres long by 1.8 metres wide and built of wood, fibre glass, carbon fibre, and Kevlar.

The first successful Atlantic Ocean crossing was completed by Sir Chay Blyth and John Ridgeway in 1966—a 92-day battle against hurricanes, 50-foot waves, and near starvation. Sir Chay Blyth made a guest appearance at the start line in La Gomera to set the race off.