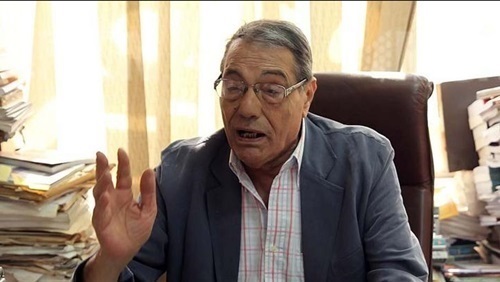 The privately-owned Al-Masry Al-Youm published the last piece by Eissa who passed away on Monday. The article was titled “Where did laws to liberate the press and media disappear?” Eissa was talking about a promising unified press and media law that was drafted by top professionals in the field and constitutional experts.

He blamed the parliament’s delay of discussing and passing the law, government manipulation to obstruct its issuance, and lack of public demand for it, under the pretext of fighting terrorism. Eissa further pointed out the “disappearance” of another law which would abolish imprisonment for press and media workers.

In an article mourning Eissa’s death in Al-Masry Al-Youm, chairperson Mohamed Amin remembered him as an opposition figure who was honoured “after his death”, as have those before him, by political regimes which never liked them but were rather relieved by their deaths.

As for columnist and TV presenter Hamdy Rizk, he recalled the last moments in the hospital before Eissa passed away as his wife prayed, shedding light on the couple’s lifelong journey together.

In the privately-owned Al-Shourouk, journalists Sayed Mahmoud and Mohamed Moussa remembered Eissa through the leftist opposition Al-Ahaly newspaper, which he co-founded.

The development of the Sinai peninsula was the focus of several writers at the state-owned daily Al-Akhbar, with a full page dedicated to the topic by its Chief Editor Khaled Miry, in which he said important projects were implemented in Sinai, employing millions of citizens and touted the “successful fight against terrorism”.

But on Sinai, Emad El-Din Hussein, Al-Shorouk’s editor-in-chief, warned of attempts to display to the public an image denying the presence of a real terrorist threat in the peninsula.

Talks on the upcoming presidential election have become more relevant as the last few months of President Abdel Fattah Al-Sisi’s first term approach. Editor-in-chief of the private Al-Watan newspaper Mahmoud Mossalam called for restrictions on rival candidates to Al-Sisi, whom he portrayed as chaotic and seeking popularity, asserting that most of them will eventually abandon the race on claims of “non-transparency.”

In Al-Masry Al-Youm, Salah Ghazaly Harb, brother of a well-known politician, wrote that Al-Sisi should answer several questions in front of the public before proceeding with the election, such as when political plurality will be enhanced and young political detainees freed, although Harb maintained support for Al-Sisi in his article.

Salah’s piece is aimed at telling the audience that it it the “Egyptian people” who will “own” this media and even have a say in the appointment of board members.