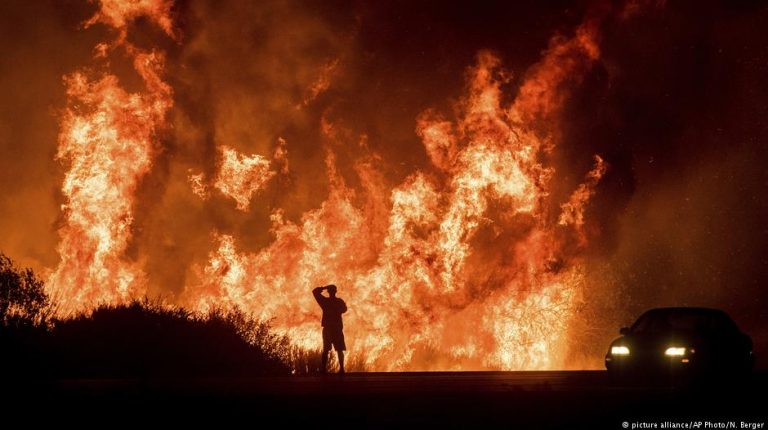 The devastating effects of climate change are becoming apparent — and the world has begun taking action. But the frequency of extreme weather events has shown we are starting to run out of time.”Crazy” weather has been a hot topic for elevator conversations this year — and yes, extremes are starting to become the new normal.

No continent was spared in 2017 when it came to extreme weather. From droughts to hurricanes, from smog to forest fires, these events killed thousands of people — and have been directly linked to climate change.

Read more: Extreme weather on the rise in Europe

Southern Europe, Canada and the United States were among the areas worst hit by devastating wildfires. Both in California and Portugal, 2017 has been the deadliest year on record for wildfires. Even icy Greenland wasn’t spared. Climate change, along with the dangerous combination of a lack of sustainable forest management and careless — or malicious — human activity, has been to blame.

Major storms were also responsible for the year’s most catastrophic events. Hurricane Harvey in the US, Irma and Maria in the Caribbean and Katia in the Gulf of Mexico left destruction in their wake. While hurricanes aren’t unusual in tropical regions, the frequency and intensity of these most recent storms — fueled by warming oceans — were out of the ordinary. But they may be a sign of things to come, if the world doesn’t take action to limit climate change.

At the same time, global sea levels reached a new high in 2017, with the polar ice caps melting at an accelerating pace. Warmer ocean temperatures contributed to the breakaway of a 1 trillion ton iceberg from the Larsen C ice shelf in Antarctica in July, at 5,800 square kilometers (2,200 square miles) one of the largest icebergs ever recorded.

Flooding caused the death of hundreds of people in the Philippines, Greece, Germany and Vietnam, to name just a few countries. Meanwhile, drought is increasing the pressure on regions of Africa and Asia, such as Somalia, South Sudan and Pakistan, where armed conflicts are already making daily life a struggle for survival.

Often forgotten, the struggles of the world’s oceans also increased this year. Despite several initiatives protecting the Great Barrier Reef, coral bleaching has continued at an alarming rate. Ocean acidification, meanwhile, is on track to make the seas uninhabitable for many aquatic creatures, endangering entire ocean ecosystems.

Governments across the globe are taking action to address current and upcoming climate threats, and leaders like French President Emmanuel Macron, who took office in May and pledged to fund climate research, have been a source of hope for many.

But 2017 will also, unfortunately, be remembered for the US withdrawal from the 2015 Paris climate accord, along with President Donald Trump’s other moves away from the fight against climate change.

As despairing as all of this may sound, it’s actually another call to take action. Weather has always been out of our control — and will remain so. But we can still work to avoid making extremes the new normal.

Egyptian politicians do not want Sudan to be powerful state: Sudanese FM