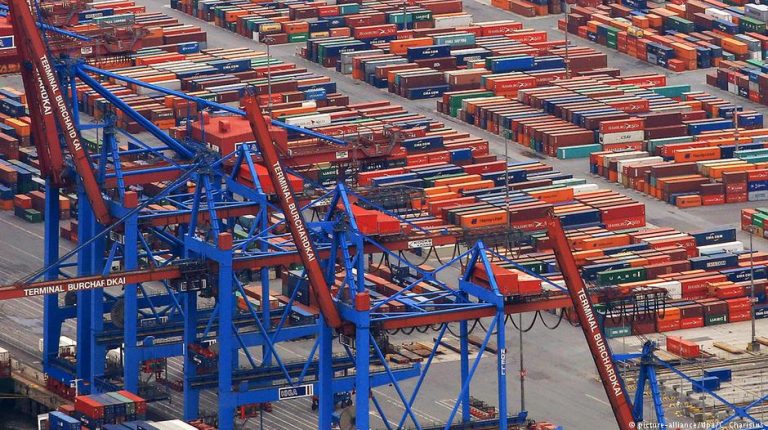 Economies are growing, wherever you look — in Germany and elsewhere. Naturally, everyone believes that this will continue in 2018. But there are risks that should not be underestimated, Henrik Böhme warns.Fancy a look back at 2017, and a reading of the tea leaves for 2018? Let’s begin with Bitcoin, lurking cryptically somewhere in the world’s server farms. It could do nicely as an icon for a volatile 2017 financial year. Is Bitcoin money? You can store it in a digital wallet on your smartphone. Yet you generally have to convert it into ‘real’ money before buying anything with it — and its valuation is so unsteady that few people will use it to buy lunch in any case. It made regular headlines over the past year as it hurried from one record high to the next, and then just as quickly crashed downwards again.

The stock exchanges of this world were similarly caught up in a speculative frenzy. In Germany, the most important stock market barometer, which tracks the country’s major corporations, climbed to unprecedented heights. Mid-cap market valuations grew even faster. In Germany, thousands of medium-sized firms dominate niche technology markets, and are often called “secret world champions.” Many are privately owned, not publicly listed, but those that are listed have seen valuations balloon.

In New York, the Dow Jones hit a new record high 70 times over the course of the year, as Donald Trump proudly tweeted. Boom times all round for owners of stock market shares. Unsurprisingly, then, 2018 forecasts are generally optimistic.

Just before Christmas, Deutsche Bank economists put forward a forecast that the global economy will grow by 3.8 per cent in the new year. Other sages have made similar auguries. What’s special is that for the first time in a decade, i.e. for the first time since the global financial crisis, nearly all world regions are growing in sync again, with the exception, perhaps, of the war-ravaged Middle East. In Europe, Germany remains the locomotive. So what could go wrong?

Remembrance of times past

It’s worth remembering the time just before the outbreak of the great financial crisis of 2008. At the turn of the millennium, Germany’s economy was considered the “sick man of Europe,” but in the early to mid 2000s, after drastic reforms, it rose to frontrunner status once again. Few economists expected any deviation from rosy economic growth trends.

Then came 2008 and the Lehman Brothers bankruptcy, which exposed a fraud-ridden real estate finance mega-bubble in the US that had metastatized globally through sales of improperly rated financial derivatives, pushing the European and American banking systems into catastrophe. In 2009, the German economy shrunk by 5 percent year-on-year.

A shock of similar magnitude could happen again. It may be that the banks have become somewhat less crisis-prone as a result of re-regulation (mind you, the Trump administration wants to re-deregulate the banks). But there are plenty of other risks.

Let’s start with North Korea. Nobody knows how the verbal banter between “little rocket man” and “the crazy old man in the White House” (as Trump and Kim refer to each other) will end. More trouble is also brewing in the Middle East, and if it gets out of control, it could shock the global economy. And the man in the White House appears to be stumbling around with a match, looking for fuses to light.

While we’re on the subject of Donald Trump

The tax reform Trump’s Republican Party has put in place may distort the highly sensitive structure of world trade. On the one hand, it’s good that Trump wants to strengthen the economy of his country. If everything goes as U.S. strategists hope, the US current account deficit (essentially the balance of imports and exports) could be halved. In addition, US companies such as Apple – which have long indulged in rigorous tax avoidance strategies – would at long last have to pay taxes at home. Donald Trump, an inadvertent leader in tax justice? That would be something.

But of course, there are often losers somewhere if there are winners elsewhere. German exporters are worried about their American sales. Industry lobbyists are already beating the drums in Berlin for a reform of corporate taxation, to compensate for possible disadvantages generated by the new US corporate tax reduction measures.

But a corporate tax-reduction race, which had already been proclaimed by the United Kingdom to compensate for negative consequences of Brexit for British economy, will end in disaster — because it’s a race to the bottom: In the end, states will lack the revenue to adequately fund infrastructure upgrades and operations.

And that’s not all
There are some made-in-Europe challenges too. The sustained economic boom in Germany, which has been going on for nearly a decade now, may be in danger of overheating. Every boom also carries within itself the germ of a crisis. If you’re driving full steam ahead all the time, you risk losing your intuition for how to deal with bad times. In Germany, there’s a shortage of qualified staff in many industries, and even where prospective staff is available, companies don’t really want to hire a lot of people that they’d have to lay off again when the next crisis comes.

Yet the production capacities of companies in some industries are no longer sufficient to keep pace with their order books. What could happen if this becomes widespread? Rising prices, leading to falling demand, and consequently, a declining tendency to invest in new production capacity. That’s how the business cycle works. Every boom carries the seed for the next downturn.

More worries: What will happen if there’s a disorderly Brexit — for example, a break between Britain and the EU without a customs union? The economies of the island and of the continent, especially Germany, are strongly interlinked.

And then there are Europe’s Zombie Companies, most of them in southern Europe. These are highly indebted companies that cannot produce profitably on a full-cost-accounting basis, and cannot repay their loans. But the banks to which these companies owe a great deal of money are afraid to call in the zombie loans, because this would entail major write-downs that would require the banks to admit they too are insolvent.

The OECD, an organization of developed-world industrialized economies, expressed concern that the number of zombie companies is growing. Italy has a lot of such companies, and it also has an election coming up in 2018, in which anti-euro-currency parties may make major gains. Italy is a potential powder keg, and its upcoming election is the fuse that could trigger the next euro crisis. If the Italian powder keg ignites, we’ll all come to understand how small, how wholly overestimated, the Greek crisis of a couple of years ago actually was.

And what about Germany’s coalition government woes?

If the foregoing still isn’t enough to persuade you that 2018 will be an interesting year, then why not take a look at the on-going negotiations in Berlin, in which the Social Democratic Party is agonizing over whether to enter another ‘grand coalition’ with Chancellor Merkel’s Christian Democrats. There have been eight years of grand-coalition government in the 12 years (and counting) of Merkel’s Chancellorship, and German companies came to no harm during those years.

But the Social Democratic rank-and-file are not keen on another coalition with Merkel’s team, and so one of two things may happen: Either a Christian Democrat-led grand-coalition government will be formed, in which Social Democrats demand a high price in social spending to join in as junior partner. Or there will be a Christian Democrat minority government which has to assemble a voting majority in Parliament for every new piece of legislation.

In either case, what’s likely to result is an increase in public spending. An indicative number: the proposals of the Social Democrats in regards to pension policy alone would amount to 10 billion euros in extra spending — every year!

But the greatest danger lies in the grand coalition’s difficulty in undertaking major pro-business reforms. This has already been apparent in recent years — and given the new situation, with the SPD reluctant to see its reputation as a pro-labor party further eroded by continued cooperation with the pro-business Christian Democrats, there is a risk of a standstill that could hurt the nation’s economic competitiveness in the long run.

As is usual in economic boom periods, the on-going good times tend to obscure a sober view of reality. There are plenty of reasons why one should look to the New Year with some concern.