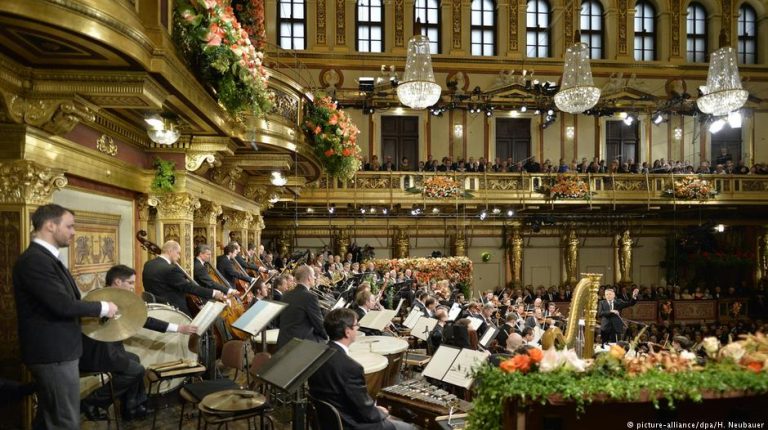 With 50 million television viewers in 90 countries, the Vienna Philharmonic’s New Year’s concert is the world’s standout classical music event. The orchestra itself has seen its public image evolve in recent years.When the lilting melodies of Johann Strauss waft from the stage of Vienna’s sumptuous “Musikverein,” it’s clear that another year has passed. Joining the television audience in the live transmission on January 1 is a worldwide audience of radio listeners and live stream users. Former EBU Media Director Annika Nyberg Frankenhauser once described the magic as “a concert with a spirited, yet nostalgic program that gives one a chance to review the year past and enter the new year with momentum.”

At the rostrum in 2018: Italian conductor Riccardo Muti, whose collaboration with the Vienna Phiharmonic dates back several decades. This marks the fifth time that Muti conducts at the prestigious event.

The program begins with the Entrance March from the Operetta “The Gypsy Baron” by Johann Strauss, Jr. and includes a variety of waltzes, polkas and marches by the Strauss family, Franz von Suppé and Alphons Czibulka.

“One can hardly comprehend the power of the waltz,” wrote author Auguste Graf de La Garde (1783-1853) during the Vienna Congress. “From the first bars, people’s faces cheer, eyes enliven, all are taken up in a tremor of delight.” It comes as little surprise that the dance form deriving from the stately and more dignified courtly minuet was prohibited – unsuccessfully – by the Church, maintaining that the seductive power of this music was not limited to spiritual matters.

At the epicenter of the waltz: the Strauss dynasty of composers founded by Johann Strauss Senior, whom none other than Richard Wagner described as “the most musical head in Europe.” Strauss Junior, arguably the first pop star in music history, toured the continent with his dance orchestra and created indelible tunes like the “Blue Danube Waltz.” “Unfortunately, not by me,” lamented his contemporary Johannes Brahms.

Blurring the distinction between light and serious music, the Strauss brand originated in Vienna. Itself based in what has been called “the capital city of classical music,” the Vienna Philharmonic is associated with Strauss waltzes, polkas and operettas like none other, although it would be a mistake to pidgeonhole it there.

The orchestra’s origins are to be found in the Vienna Court Opera, whose musicians were commissioned on occasion by Mozart and Beethoven in “academy” concerts. Eventually a need for a full-fledged orchestra was perceived to perform repertory separate from the operatic repertoire. In 1841, composer and conductor Otto Nikolai founded what was to become the Vienna Phiharmonic, yet to this day it is stipulated that its members must also be engaged at the Vienna State Opera and perform both in opera and in concert.

Some seven thousand concerts were to follow in the Philharmonic’s over 170 year history, earning accolades from composers who worked with it: Richard Wagner dubbed this orchestra “one of the world’s very finest,” Anton Bruckner called it “the supreme artistic association in music,” Johannes Brahms called himself the Vienna Philharmonic’s “friend and venerator,” Gustav Mahler felt bound to it “through artistic ties.” Richard Strauss, however, is the source of the most quotable quote: “Praising the Philharmonic would be like carrying violins to Vienna.”

From the outset, the Vienna Philharmonic has been a self-governed group. “The gateway to the orchestra is the Vienna State Opera,” explained oboist Wolfgang Plank in a DW interview. “That’s where the young musicians start, and if they pass the three-year probationary period, they’re gradually engaged in concert performance. How much opera and how much concert activity one has depends on the repertory chosen. We tend to serve mostly in the opera pit, but for most orchestra members, it’s about fifty-fifty.”

Describing an orchestral sound as unique is difficult nowadays, but when it comes to this group, “unique” is in fact the word most often used. “The oboe, for example, is a different instrument here than in other orchestras: an earlier model, richer in overtones,” said Wolfgang Plank. “The horns, the timpani, even the triangle are all specially constructed for the Vienna Philharmonic.”

Described as particularly homogenous, the Vienna sound has been shaped by classical music’s seminal personalities, beginning with Hans Richter, the legendary conductor of the first “Ring” cycle in Bayreuth, who led the Vienna Philharmonic from 1875 until 1898 in what is called its “golden era.” Gustav Mahler worked closely with the orchestra from 1898 until 1901 and took it on its first tour abroad, to the Paris Exhibition in 1900. The nineteen-year era of Felix von Weingartner began in 1908 and saw the orchestra on its first tour outside Europe, in South America. In 1933, the Vienna Philharmonic began to work only with guest conductors, a tradition it continues to this day.

After the annexation of Austria into Nazi Germany in 1938, authorities revoked the orchestra’s self-governing structure. It was only after the intervention of conductor Wilhelm Furtwängler that the decision was reversed. It was hardly a golden era for the Philharmonic, however: all Jewish members were dismissed, five died due to imprisonment in concentration camps or were murdered, another two died in the wake of persecution in Vienna. Nine musicians were forced into exile. The eleven orchestra members who were married to Jews or stigmatized as “half-Jews” stayed on in constant fear of losing their special privileges. In 1942, 60 of 123 active members of the Vienna Philharmonic were members of the Nazi Party, a far higher proportion than in the populace at large.

These facts have only come to light a few years ago. Citing Austria’s history of coming to terms with its Nazi heritage in fits and starts, Swiss historian Fritz Trümpi told DW, “Public pressure on the orchestra became so great that it had to open up its archives.” An ongoing, exhaustive review of the era including primary sources with the disturbing stories of several individuals has been published on the Vienna Philharmonic’s home page since 2013.

Into the modern era

The past has done little to stain the Philharmonic’s postwar glamor. It continued to work with the world’s foremost conductors, including five decades in close association with Herbert von Karajan and a period with honorary member Leonard Bernstein. The Vienna Philharmonic has performed at the Salzburg Festival nearly every year since 1922, and the “Vienna Philharmonic Weeks” have taken place in New York and Japan since 1989 and 1993, respectively. The annual performances in Vienna’s Schönbrünn park draw upwards of 100,000 visitors.

In 2005 the musicians were named “Goodwill Ambassadors of the World Health Organization” (WHO), and in 2014 the orchestra took two major distinctions: the Birgit Nilsson Prize (at one million US dollars, the highest prize-money award in the classical field) and the Herbert von Karajan Prize, bestowed at a gala concert in Baden-Baden in December. In his laudatory address, Andreas Mölich-Zebhauser, director of the Baden-Baden Festspielhaus, summed it up: “The fact that the ‘philharmonic idea’ is passed down from generation to generation shows a deep awareness to the fact that music must be kept alive and not become a museum object.”