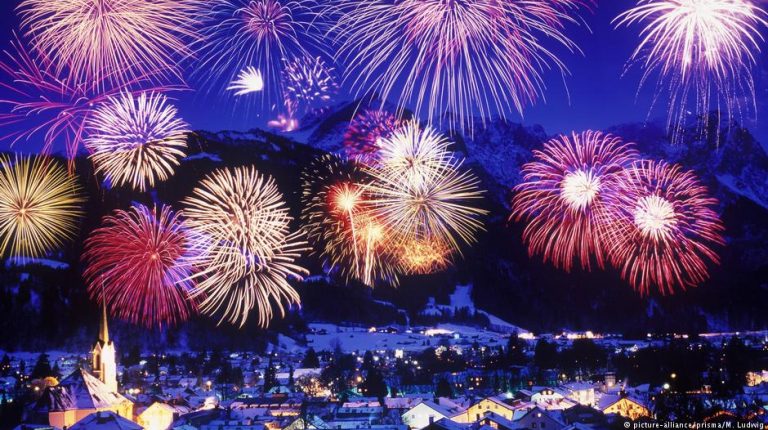 In some countries like Germany, it’s not New Year’s Eve without a night sky full of fireworks. But how bad are these colorful explosions for our environment? And what are the health effects?Starting a new year can be costly. Germans, for instance, send €100 to 200 million ($240 million) up in smoke every New Year’s Eve, as spectacular fireworks displays light up the sky above villages and cities across the country.

But the annual tradition also has an environmental cost, with each rocket releasing a toxic mix of chemicals and particulates into the air.

“Each rocket consists of about 75 percent potassium nitrate, 15 percent charcoal and 10 percent sulfur,” said Günter Klein-Sommer, a chemist and pyrotechnist, speaking at a recent lecture on the chemistry of pyrotechnics at the University of Cologne.

Depending on the desired effects, other components might be added, including copper, barium or strontium compounds. These end up coloring the fireworks blue, green or red.

All of these chemicals require high amounts of energy to be produced, only to fizzle out in a few short seconds, critics have argued.

In 2016, fireworks produced 5,000 tons of particulate matter (PM10 — particles measuring less than 10 microns in diameter) in Germany alone, according to the Federal Environment Agency (UBA). This amount corresponds to about 17 percent of the annual vehicle particulate emissions.

Most of this fine toxic dust is produced in the span of one or two hours during New Year’s Eve fireworks displays, especially in large built-up areas such as cities. The tiny dust particles are invisible to the naked eye, and the UBA has warned these small particles are particularly harmful to health.

The fireworks industry, for its part, continues to maintain that it’s not as bad as it seems. Fritz Keller, an environmental consultant with the German Association of the Pyrotechnic Industry (VPI), said particulate pollution from the traffic sector can’t be lumped together with the pollution caused by fireworks.

Most of the particulate matter released from diesel vehicles, for example, consists of sooty carcinogenic particles, which have a negative effect on soil and plants — and human health.

“In fireworks, on the contrary, particulate matter consists mainly of salts. That’s something completely different in terms of chemistry,” Keller said.

Nevertheless, health experts have advised against directly inhaling the smoke left after a fireworks display, with research often showing that it can cause respiratory problems and aggravate asthma.

The amount of time particulate matter remains in the air after a fireworks display depends on several factors. Strong wind, for instance, helps disperse the pollution rather quickly. The UBA highlighted the difference a windy day can make in a comparison between New Year’s celebrations in 2009 and 2013. Rain can also have an effect.

Chemist Klein-Sommer also pointed out that although the concentration of particulate matter on New Year’s Eve is much higher, levels are usually quick to drop back to normal on January 2.

What about garbage and noise?

The passion for fireworks on New Year’s Eve doesn’t only leave a trace of toxic dust. After the fun is over, component parts and packaging are left behind, often scattered on the street, in gardens, in water and on roofs.

Rocket shells and packaging make up around 60 to 75 percent of a firework, and usually consist of cardboard, wood, clay and plastic.

“We really try to take care of the environment,” said Klaus Gotzen, head of the VPI. “But our efforts are often limited by legal requirements.” He points out, for example, that blister packs and rocket lids are a must, for safety reasons. “These are guidelines that are supposed to prevent the accidental ignition of several items at once,” he said.

Gotzen believes the most eco-friendly alternative are battery fireworks, a set of rockets strung together which produces less waste and is safer.

“With those, you have all the fireworks in one package,” he said, pointing out that the set only needs to be ignited once to set off a chain reaction that lights the rest. That means less waste — and above all, it’s safer.