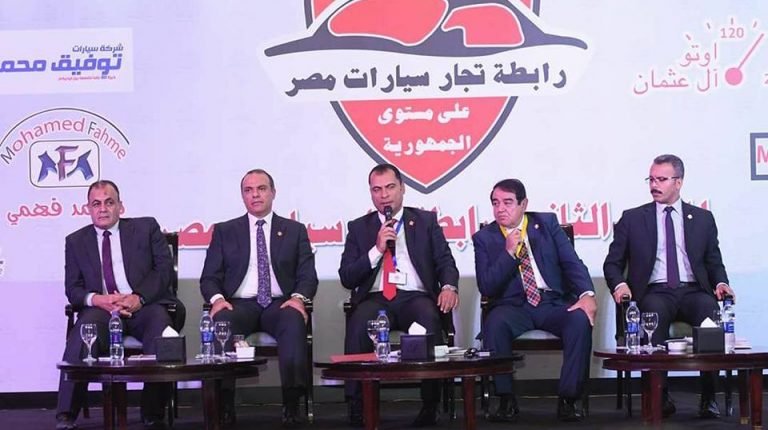 The participants in the 2nd Conference of the Egyptian Automotive Dealers Association, held last week, called on the government to support the automotive sector in its attempt to overcome its crisis, especially after the floatation of the Egyptian pound.

Traders called for the establishment of an integrated city for cars with a system of land ownership, rather than usufruct.

President of the Egyptian Automotive Dealers Association Osama Abu El Magd said that the association called on all parties concerned with the automotive sector to establish a special city for car exhibitions, stressing that all showrooms should be relocated there.

Abu Al-Magd pointed out that the association refused to obtain the city based on a usufruct arrangement, revealing that car dealers are willing to establish a joint stock company to finance the project.

He added that car retailers are the real victims of the auto crisis, as official agents do not accept changing car prices, while traders and distributors pay the price of the recession.

He pointed out that the association had launched an initiative in early 2017 to stop importing cars to reduce the demand for foreign currency, until prices return to decline again.

Abu Al-Magd added that the association has succeeded in implementing the initiative, and many car companies reduced their imports of cars and production components in light of the price hike.

The initiative resulted in a severe decline in vehicle supply and sales.

The automotive market has witnessed many challenges and crises this year, pointing out that the association managed to settle nearly 55 disputes worth EGP 23m, whether between traders or consumer complaints.

During the association’s annual conference, Abu El Magd revealed that 15% of complaints came from consumers, while the remaining 85% were among traders.

He added that there were some disputes dating back to eight years ago, stressing that only three complaints are left, waiting for determination.

He also revealed that a number of companies and traders resorted to layoffs in the last period due to the severe decline in sales and the big losses incurred by several companies. Some of these companies tended to reduce their margins of profitability to ensure the continuation of sales.

Abu El Magd said that the association plans to expand its initiative nationwide, with the aim of removing obstacles and crises facing car dealers and consumers. The Egyptian Automotive Dealers Association is currently based in five governorates, including Cairo, Alexandria, Minya, Port Said, and Sharqia.

Hassan Suleiman, president of the Egyptian Automobile Manufacturers Association, said in his speech before the conference that Egypt has the best car assembly industry according to international companies and dealers.

He pointed out that the production of a single car requires 1,000-1,300 components, which shows that the car industry is very complicated, second only to the aircraft industry.

Suleiman pointed out that the automotive industry does not receive enough support from the government, despite the fact that there are 14 factories operating in the car assembly industry.

Rafaat Masrouga, an automotive sector expert and honourary chairperson of the Automotive Marketing Information Council (AMIC), said the total sales of the automotive market in 2017 were the lowest in many years, noting that the sales rates fell to 2005 levels.

He criticised the current sale rates that were estimated at EGP 30bn, while the target amount was about EGP 250bn, attributing the decline in purchasing power of consumers to car price hikes.

Masrouga pointed out that car sales in Egypt are still weak, averaging 32 vehicles per 1,000 people, while the average annual income of citizens is $2,400.

He added that international car companies will not inject new investments in the local market, until the annual sales rate exceeds 600,000 cars.

On the other hand, Tamer Al-Shahawi, a member of the House of Representatives, said that the car market is one of the main sectors that has been negatively affected by the economic crises that plagued the country in the last few years, namely the lack of foreign currency and price hikes. They resulted in the decline in purchasing power of all consumers.

He called for more incentives for car manufacturers, to increase the local components of domestically-assembled products, as well as shifting from assembly to manufacturing cars through attracting major global brands.

Yasir Hashish, distributor of Lada and BYD in Egypt, said that customs on imported cars from Europe will be lifted on 1 January 2020, not in 2019 as rumoured.

The most desirable brands for Egyptians are Japanese, Korean, and Chinese respectively.

Hashish noted that the rumour of reducing customs on car exports by 80% doubled the sales decline.

The EU-Egypt Association Agreement (EEAS), which entered into force in 2004, provides that customs duties on vehicles “shall be reduced by 10% annually starting six years after the agreement’s entry into force, in January 2010.