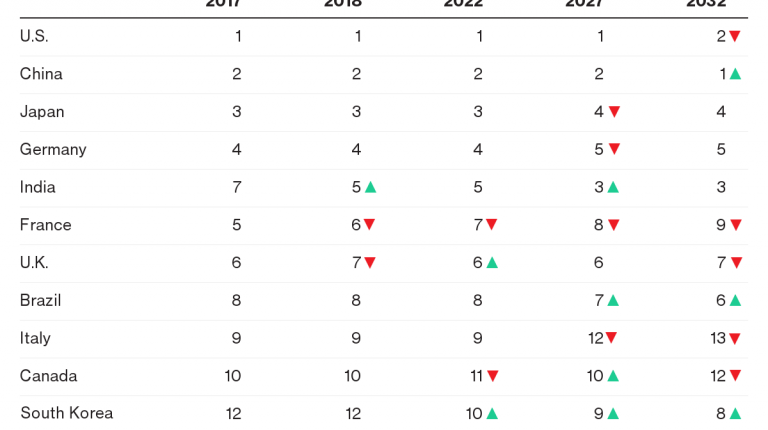 The economy of the United States of America is currently the largest in the world, representing nearly a quarter of the global economy (about 24.3%), standing at a value of $18tn, according to data from the World Bank.

The second largest economy is China’s, worth $11tn, representing 14.8% of the world economy, followed by Japan at $4.4tn, which represents 6% of the total world economy.

In fourth, fifth, sixth, and seventh place come the economies of Germany, the UK, France, and India respectively. The German economy stands at $3.3tn, the UK economy at $2.9tn, France at $2.4tn, and India at $2tn.

However, a big change is likely to occur throughout the upcoming years.  A report recently released by the Centre for Economics and Business Research (CEBR) in London has stated that China, currently the world’s second largest economy, is expected to become the world’s number one economy by 2032, replacing the US. This prediction, when you look at it, seems consistent with the changes occurring in the world’s largest economies, given the growing importance of Asia’s major economies, which is expected to continue in 2018 and throughout the years to follow, as reported by Bloomberg.

The CEBR’s annual World Economic League Table (WELT) 2018 charts a trend of a clear global economic shift to Asia. “The interesting trend emerging is that by 2032, five of the largest 10 economies in the world will be in Asia, while European economies will be falling down the ranking, and the US will lose its top spot,” said CEBR Senior Economist Oliver Kolodseike.

Previous reports had shown that China would occupy the top spot by 2031, but that has been revised as the predicted negative impact of US President Donald Trump on his country’s economy has been “less than severe”, The Daily Mail reported.

According to data from the WELT and its estimations of the world economy’s growth, in 15 years, three out of the world’s four largest economies will be Asian—including China, India, and Japan. Korea and Indonesia are also expected to be on the list of the world’s top 10 economies.

Similarly, India is likely to continue its outstanding growth in 2018. The CEBR report said that India is expected to “leapfrog” the economies of Britain and France in 2018, becoming the world’s fifth largest economy.

“Despite temporary setbacks, India’s economy has still caught up with that of France and the UK, and in 2018 it will have overtaken them both to become the world’s fifth largest economy in dollar terms,” Douglas McWilliams, CEBR deputy chairperson, told The Daily Mail.

And while the UK may be a bit behind France throughout the next two years, the impact of Brexit on the British economy will be “less than feared”, allowing the UK to overtake France again in 2020, according to the CEBR.

The Times of India has reported that the CEBR’s report shows the subcontinent will be the world’s third largest economy by 2027.

Technology and urbanisation will be two of the most important elements playing a role in the transformation and shift in the world economy over the next 15 years, according to Kolodseike.

India’s economy could reach $10tn by 2030, according to chairperson and managing director of India’s Reliance Industries, Mukesh Ambani, as reported by the Indian Swarajya magazine.

Interestingly, by 2032, the list of the world’s top 25 economies will include Taiwan, Thailand, Philippines, and Pakistan, as Pakistan will rise from the 41st position in 2017 to the 25th position in 2032.

These anticipated changes in the world’s largest economies are likely to change the world as we know it, where the economy of the United States of America is the leading economy. 2018 will be the start of a setback for some economies, and the growth of others, but one thing that is certain is that Asian countries will be proudly leading this upcoming phase, and achieving significant growths we may not have witnessed before.