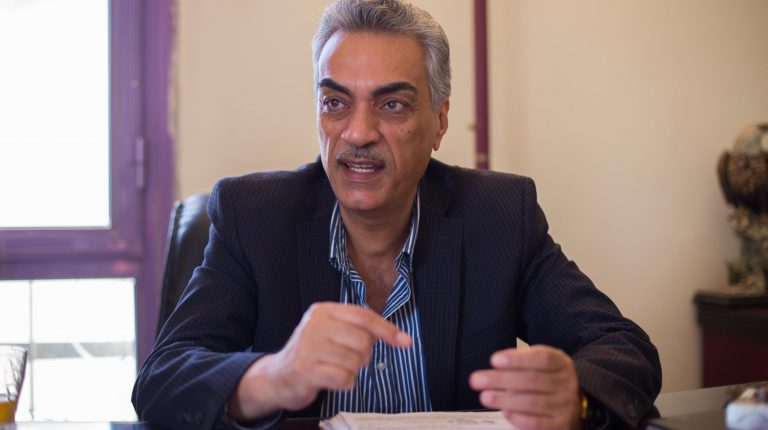 In his own words, Ahmed Swan is a former member of the Congressional Advisory Committee, who took office after the September 11 attacks in 2001 and held the position for eight years. The committee is an advisory unit that cooperates with Republican members of Congress and the president of the United States, in the case that is he from the Republican party, to assist and cooperate with them.

Ahmed Swan says that America is moving behind Israel, that the latter has become a major influencer in American elections, and that America is no longer the only pole in the world and that many alliances have been formed against it.

All these new ideas came up during our dialogue with Swan and the text of the dialogue was as follows:

1. How does the US administration make decisions?

America is a state based on institutions and any decision is made after many opinions and assessments, from the competent and concerned, but this does not apply to the Trump presidency.

The way he governs, his decisions are based on reactions, as the case was during the presidency of George W. Bush.

2. Why did Trump decide to recognise Jerusalem as the capital of Israel?

Trump came under pressure from the Jewish lobby in America, and Trump did not consult with the institutions concerned, nor even with his Republican Party.

3. Is the Republican Party satisfied with Trump’s performance?

4. Was Trump pressured to make such a decision?

Of course, Trump is in trouble and there is a plan to sack him and perhaps imprison him as well. He needs a strong ally who strengthens his position in the media. The Jewish lobby controls the media and they have to be satisfied to cover up his scandals, especially since Trump started his term with the Russian scandal.

5. What can we do about the Palestinian issue after Trump’s decision?

It is not in our hands to do anything to repel Israel after Trump’s decision, except an intifada (uprising). The world will respect the uprising of the Palestinian people and occupied citizens, as they respected the people of South Africa when they rose up against the apartheid regime, which will bring the Palestinian people their rights. Arab countries have nothing in their hands to do but to support the intifada.

Here I must emphasise that the stance taken by Grand Imam of Al-Azhar and the Coptic Orthodox Pope, by refusing to meet with the US Vice President, is a strong, practical response and will have a large impact in the world later on.

6. What explains Condoleezza Rice’s sudden appearance on the political scene and her visit to Saudi Arabia in conjunction with the Trump decision on Jerusalem?

They asked Rice for help due to her experience in the Middle East in difficult times such as the Iraq war. Asking her for help now is particularly associated with the term creative chaos. Perhaps that is her mandate, to show them how to be creative.

Yes, it increased so much so that there is a general feeling that Israel is leading America and flattering Israel to an unprecedented degree.

8.What is forcing them to do so?

Elections are the biggest reason. The Jewish lobby controls the joints of American society, especially in the media, and uses it to blackmail all presidents of America. In the case of Trump, he is completely under Israel’s control.

9. How do you see America’s role in Syria?

America arranges the situation in the region according to both its interests and Israel’s.

Today, western countries do not fight using their armies as much as possible, employing groups or militias, and sometimes other countries, to implement their plans.

America, or actually Israel, wants to end the Palestinian issue, therefore they eliminated the ‘axis of resistance’ represented in Syria. Both Israel and America exploited the Syrian revolution to disintegrate Syria and push it out of the equation completely.

10. Were the incidents in Syria planned?

The plot to strike Syria, Iraq, and Afghanistan preceded the 9/11 attack, but the attacks were taken as a pretext for its implementation. Bush rejected it back then, but now the plan is in action,

not to mention the famous article about the green enemy, which must replace communism.

11. How do you see Russia entering the confrontation in Syria and establishing rules that it says are permanent?

It is common belief that America is the only pole in the world and this is a misconception. America, with all its might, could not overcome North Korea or Iran. The world does not stand idly before American hegemony, and so many alliances have been established in several regions of the world against America. Russia is trying to create an axis in the region to resist American hegemony, and I think it has come a long way in this with Turkey and Iran.

This is useful for the countries of the region in general, so that there is not one entity in control of the region, especially with the significant shift in US moves in favour of Israel. Yet we must be aware that Israel is also present in Russia and shares interests there, but it is not comparable to the case in America.

12. To what extent did the Egyptian rapprochement with Russia and East Asian countries affect American decision-makers regarding relations with Egypt?

For many years, I have been calling for strengthening ties with Russia and China, and not relying on one country, namely America. It is not true that Egypt has only one ally with great power represented in America, which is at the same time Israel’s biggest ally, guaranteeing its security and superiority over all Arabs and using the American veto as it has in previous eras.

It was necessary for Egyptian decision-makers to turn to other countries, to rely on ourselves, and not be totally dependent on America or in fear of it. This is what President [Abdel Fattah] Al-Sisi has already done in going to China and Russia, which grants Egypt more respect from the American side and does not harm our relations with them. The move does not weaken relations, but it will not improve them. What will happen is that they will deal respectfully with Egypt, knowing that we are an independent sovereign state, free to act as it will and be hostile towards whomever it wishes, not based on pressure from the US or any other state.

13. Is the former US administration directly or indirectly responsible for plans to divide the Middle East?

America does not act as a single government, but there is a continuous policy that does not change with the change of governments. Some presidents are able to change this policy, and make it a public policy of the state. One example is the policy initiated by US President Bush Jr. under the name of creative chaos. Without being aware of it, successive administrations are attempting to meet the needs of Israel. Creative chaos, the division of the Middle East and its fragmentation are what Israel wants, which American research centres have said is the best thing for Israel’s security. Hence, it is the strategy of the United States of America and it will continue to be so.

Yes, and a strong opposition for Trump grew inside the party, as the charges directed to him and his administration may amount to treason. There is a widespread expectation in American circles that the upcoming elections will be won by the Democrats and this would be a rapid transformation.

15.Why did Democrats lose elections in the last period?

One reason is Democrats’ slackness and their belief that the elections were decided, but they were wronged in other factors, such as the Jewish lobby helping Trump and the spread of accusations against Hillary Clinton, which turned out to all be false.

16. What is the current feeling among the American electorate?

There is a general feeling that Trump is the American Gorbachev, and that if he continues with this mentality, he will destroy America. But I do not think he will complete his mandate to do so to America.

17. Did America succeed in fighting terrorism and did it contribute to the elimination of the Islamic State (IS)?

Of course it did not succeed and terrorism is on the rise and America supported terrorism in Afghanistan until it finally turned against it. In Syria, many news and evidence emerged about deals between America and IS and their exit from Raqqa under the eyes and ears of America. We all heard the statements from leaders of Kurdish forces about the battle being a “theatrical play”. America is losing its credibility in the fight against terrorism and is seeking to secure itself and its interests rather than combat terrorism.

18. What are your fears for the coming period in the region?

I am afraid that Arabs will push for war against Iran in the next stage. And although Trump declared that America will not act as a policeman of the world, Israel rejects this because it wants to strike Iran. Egypt is the only country capable of stopping Iran’s ambitions in the Gulf states and it does not want and would not support a war against Iran.

19. What does Egypt do in light of this confusion and these major transformations?

I am not exaggerating if I say that the leadership in Egypt is walking on the right path, “by the book”. The Egyptian army, already a giant, as it is referred to abroad, is being strengthened. It is the 10th in the world. The regime in Egypt is trying to balance relations between America, Russia, and take Egypt back to its status in the world after losing its impact for a long time.