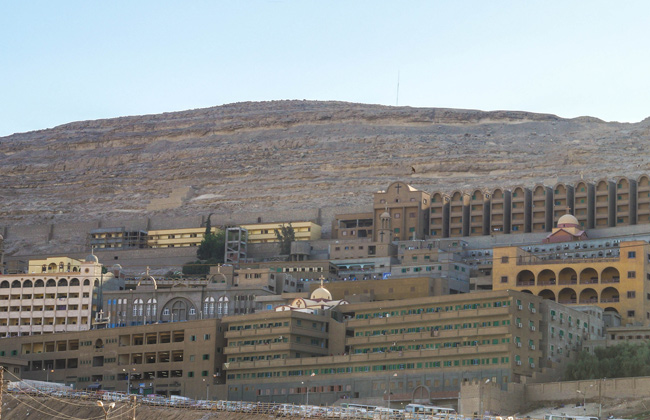 Egyptian churches have made all preparations to host Orthodox Christians who will celebrate Orthodox Christmas on Sunday January 7, marking the end of their 44-day fast. The Holy Virgin Mary Monastery in Doronka, Assiut is one of the major Christian worship places that will receive thousands of people for this occasion.

Located about 10 kilometres from Assiut, on the west bank of the Nile River, the monastery is not only one of the most unique monasteries in Egypt, but is also believed to be one of the most important religious and touristic attractions in the governorate of Assiut. It was the last stop for the Holy Family in Egypt before leaving for Nazareth. Since then, this area has been heavily populated by Copts.

Many Coptic Christians believe that the monastery, and within it, the Chapel of St. Mary—built inside a cave—is the oldest in Egypt,believe to have originally been built in the first century AD. It is said to have been built over the place where the Holy Family: Jesus, the Virgin Mary, and Joseph the carpenter, stayed during their trip to Upper Egypt. The monastery’s altar, dated 747 AD, is said to be located on the very spot where the baby Jesus rested and is claimed to be the oldest in the world.

This monastery should not be confused with the much larger El Moharek Monastery further south.

From 7 to 21 August, every year, the monastery receives thousands of pilgrims as August is believed to be the month the Holy Family arrived in Assiut. The monastery conducts masses and baptisms daily during this period.

The Virgin Mary Monastery stands 120 meters high, giving its visitors the opportunity to enjoy a magical panoramic view over western Assiut. It is indeed a beautiful and peaceful place where you can meditate.

The Holy Family came to this place after they had escaped from Bethlehem in Palestine. They crossed the Sinai desert and passed through what is now Al-Matariya and Heliopolis in Cairo ,until they reached Mount Dronka in Assiut.

There are a number of churches within the Virgin Mary Monastery, the oldest of which is the cave chapel, the front of which measures about 160 meters high and is 60 meters deep. Many stories are told by the Christian inhabitants about miracles by Jesus in every inch of the place.

Inside the 4,500-year-old cave, which dates back to 2,500 BC, people gather to say their prayers while examining the small room which is believed to be the Holy Family’s refuge before leaving back home.

Besides the cave chapel, the convent includes halls for spiritual and social activities and many rooms for the reception and accommodation of visitors.

We can also see cemeteries of Christian Copts who have passed away. They were lovers of the Virgin Mary, who wanted to be buried near the place where she once lived.

Back then, the Holy Family left Assiut on a boat heading north to Misr Al-Qadeema (Old Cairo). They reached the now-Church of Abu Serga, and spent a few days in its cave.

“After Herod died, an angel of the Lord appeared in a dream to Joseph in Egypt” and said, “Get up, take the child and his mother and go to the land of Israel, for those who were trying to take the child’s life are dead,” The Gospel of Matthew 2:19-20 of the bible read.

They then crossed the borders of Egypt to Palestine, where Christ began a new phase in his call to Christianity. As an extraordinary child, he taught Jewish priests. In his youth, he saved a woman from being stoned to death. He left these immortal teachings, which changed humankind, just as his steps changed the history of our lands.