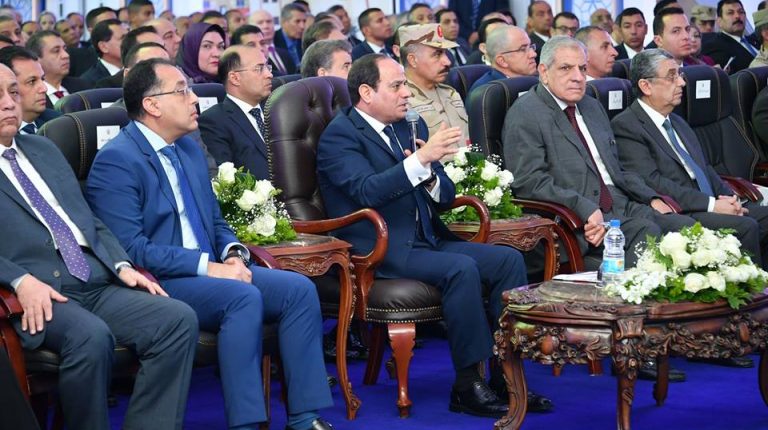 Egypt’s President Abdel Fattah Al-Sisi, inaugurated on Monday through video conference , a number of new roads and bridges projects, such as Al-Fangari Bridge, which is planned to  serve as a major axis connecting Rod AL farag axis, in west Cairo, and Al-Mushir axis in the 5th settlement.

Moreover, Al-Sisi inaugurated social housing projects in the 10th of Ramadan city, as well as, east Cairo, and the housing project “Dar Misr” in  6th October, as well as the water purification and desalination plant in New Cairo.

The president pointed out that it was important to finish installing the gas and telephones before paving roads as the installation of electricity and sewage were completed.

On the other hand, Minister of Housing and acting Prime Minister Mostafa Madbouli said that the ministry is working on the implementation of 600, 000 units of social housing worth EGP103bn, noting that these projects provided up to two million direct jobs.

He explained that, the ministry’s investments in development projects since middle of 2014 reached EGP 397 bn.

Moreover, he added that the authorities took into consideration the gas link during paving the road, explaining that this is related to the implementation plan of the gas company itself, because there is interlocked within the pavement.

The Minister pointed out that a number of other projects are being implemented at a cost of about EGP 268bn, saying that these projects will be completed according to the plan in the first quarter of 2019. Moreover, he pointed out that 80% of the housing units in 10th of Ramadan city were handed over to the south-west of the “tenth district” of the citizens.

The citizens began to occupy these units already, Madbouli pointed out that 10th of Ramadan city doubled its population in three and a half years. He explained that the population in the city is now approaching 1m compared to 400,000 in 2014, attributing this duplication in the population to the projects and services that contributed to the development of the region.

He added that the New Cairo water station contributes to solving the problems that the population face, explaining that the station provides half a million-cubic metres of water to serve New CAIRO and the New Administrative Capital.

He added that these projects are not implemented haphazardly but, to face a possible issue. “We will not allow a water crisis to happen in Egypt, we are implementing the largest desalination project in our history,” Al-Sisi emphasised. On the other hand, Madbouli said Al-Fangari Bridge project was implemented in a record time and at the highest level, pointing out that the bridge extends along 1.5km with a total cost exceeding EGP300m.

On the other hand, Al-Sisi asked the Minister of Trade and Industry to quickly complete the construction of 4,000 factories for youth employment, in order to be ready for operation within six months to provide 40,000 job opportunities for youth. For his part, Tarek kabil, Minister of Trade and industry, said that industry is one of the cornerstones to achieve the objectives of the Egypt 2030 vision, to become one of the world’s 30 largest economies by 2030. In this concern, kabil added that to achieve this vision, the Ministry of Trade and Industry is working to reach an 8% rate of industrial growth, and increase the contribution of industrial production to Egypt’s total national income to 21% by 2020. The Minister pointed out that this will be achieved through increasing the private sector and small, medium and micro enterprise participation.

He pointed out that thus will result in targeting a 50% reduction in trade balance and providing no less than 3m job opportunities by 2020. “We aim to provide 60m sqm of industrial land and 22 industrial complexes by 2020,” Kabil said.

Also, “we aim to prepare and launch an industrial investment map to support domestic and foreign investment in line with the needs of domestic and international markets,” Kabil added. Furthermore, the minister assured that the ministry has succeeded in reducing the period of obtaining a license from 634 days to seven days only for low-risk industries and 30 days for high-risk industries, and issued about 3,000 permits and operating license for factories in addition to the issuance of building permits for the first time following the issuance of the licensing law. He added that 2376 factories were inaugurated during the year 2016-2017 with investments amounting to EGP 62.4bn, providing direct employment to about 80,000 workers and about 350,000 indirect jobs.