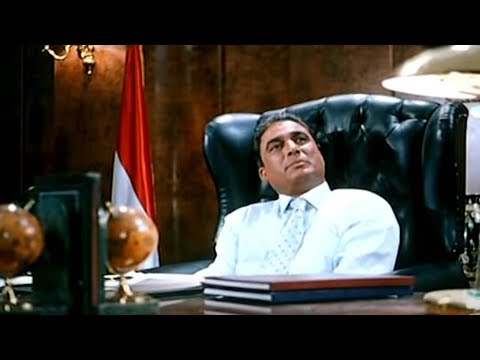 Two weeks ago, I wrote about an intimate human relationship coincidently formed between a hero who is imperfect and a victim who is misrepresented and unrepresented in Atef El-Tayeb’s Against the Government (1992). As a follow-up in this week’s article, I would like to refer to another film that holds an unstable relation between a Minister called Ra’fat Rustom and his personal and closest assistant named Ateyya Asfour.

Director Samir Seif and writer Wahid Hamed present His Excellency the Minister (2003) as a strained character who usually wakes up following intense nightmares that strongly mirror to the audience what he does in his everyday real life.

Coming to his position through a mistake in place of another who carries a similar name, our infamous hero, enacted by Ahmed Zaki, succeeded in keeping his chair for a very long time. Becoming a victim of the “malignant cancer” of the corrupt system and giving up his young age “revolutionary slogans and dreams”, Ra’fat- as he mentioned- turns into a perpetrator of crimes himself who does not wait to destroy anyone who might obstruct his hunger for power and money.

Within this context, we clearly see Ra’fat’s disturbing relationship with his wife, his daughter, and his son who all play major roles in most of his nightmares. We know how his consistent fear of losing his post supersedes his internal peace and his struggle to sleep without being faced with trauma.

Consequently, His Excellency calls his obedient and faithful assistant – played by Hisham Abdel Hamid – asking for help. Differently from our minister Rustom, the script does not mention anything about ‘Atteya. The scenes display the latter just as a clever employee who wants to satisfy his boss. And it is important to mention that we remained unknowing of ‘Atteya’s family life, his education, or the good sides of his character until the very end of the film after His Excellency suddenly gives commands of his murder.

What we initially know about ‘Atteya instead is that he is (or was) a very good listener to His Excellency. He tried as much as he can to establish a suitable, relaxing environment for the Minister on many levels. He never said no to working as a driver, a drug dealer, and a pimp. Moreover, he insisted on staying in the same cell with Rustom amid the latter’s struggle to overcome his nightmares.

The more the movie goes on, the more we realise the intimacy between Ra’fat and ‘Atteya. Not essentially out of confidence or friendship but rather out of severe depression, as Ra’fat noted to ‘Atteya, the latter knew His Excellency’s deepest secrets including the millions of dollars he has illegally amassed.

“You know everything about me,” said Ra’fat while preparing his assistant to visit the psychiatrist instead of him. To avoid any sort of scandal, Rustom chose to be invisible and to let ‘Atteya’s be His Excellency’s voice to the psychiatrist. Nonetheless, the medium through which our unstable hero’s nightmares would be represented, namely ‘Atteya, becomes his source of fear. Informed by one of his dreams, Rustom is urged to kill ‘Atteya because otherwise, a book will be published about his shameful ministerial history.

Certainly, while the expected and potential danger of ‘Atteya is absent, we figure-out that it is omnipotently present. In a mourning press conference, His Excellency is asked whether ‘Atteya committed suicide or whether he was murdered. Claiming not to know anything about the incident, Rustom further guaranteed a silencing of Atteya’s voice. Paradoxically, however, His Excellency gets haunted with the new victim who is now added to his nightmares.

Here, the visibility and the representation of ‘Atteya’s victimhood is different from the type discussed two weeks ago in Against the Government. In the latter, we get emotionally closer to the victim’s favourite sports and movies, as he formed an intimate relation with the ‘corrupt’ hero who in turn started to question his ‘imperfect self’ as a result of this human interaction.

For ‘Atteya, in contradistinction, his personal life and love for his wife and children is made visible to us just before and following his death when our hero – or perpetrator- chooses to underscore these ‘imperfections’ by brutally ending the very relationship that allowed his to see these flaws. Put differently, Ra’fat’s nightmares and awake hallucinations prove to be the most credible tool for us to learn more about ‘Atteya, as is the case with the other victims of His Excellency.