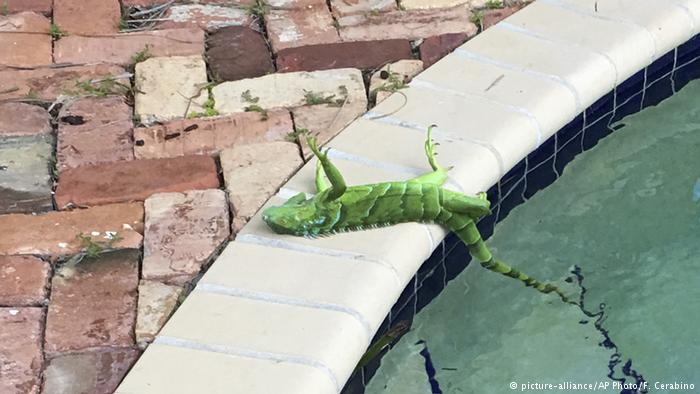 Heat waves in one part of the world, freezing blizzards in another. These weather extremes have a profound impact on wildlife as well. Here are some of the more surreal examples.Dead bats falling from the skies

What sounds like a line from the Book of Revelation is in fact currently happening in Australia. It’s not a sign of the impending Apocalypse (hopefully) but of an extreme heat wave that has gripped the country. The bats in question – gray-headed flying foxes – can weigh as much one kilogram (2.2 lbs.) with a wingspan of up to one meter (3.3 feet).

They mainly eat nectar, pollen and fruit and are a common sight in south-eastern Australia. But they don’t fare well when temperatures rise significantly above 30 degrees celcius (86 F). Australia’s south-east has been experiencing a serious heat wave in recent days with thermometers showing readings as high as 47.8 C. As a result, the megabats, young ones in particular, have been dropping from the skies. Dead. At last count, 204 animals had been killed by the heat.

Frozen but not dead

On the other side of the globe, in the United States, Iguanas have been falling from trees for the opposite reason. It’s too cold! Florida, which is used to tropical heat all year round, has seen temperatures fall to near freezing and suddenly the green lizards have been tumbling from the trees left and right.

The good news is they aren’t dead – at least not all of them. Shocked by the cold, they freeze – figuratively speaking. It’s not a new phenomenon and once the temperatures rise again, the more cold-resistant among them will come back to life. Ironically this process of natural selection makes iguanas, initially an invasive species in Florida, increasingly capable of surviving in colder climates so we shouldn’t be surprised if they gradually start so show up further north than sunny Florida.

Frozen sharks on the beaches of Massachusetts

Iguanas in Florida weren’t the only ones caught off-guard by the recent sudden drop in temperatures in the eastern United States. But not all creatures fared as well as the green lizards. During the “bomb cyclone” that hit the northeastern states, frozen sharks suddenly started to wash up on Cape Cod in Massachussets. And yes, they were literally frozen and very much dead.

Thresher sharks, which is the species in question, can go some way to retaining their metabolic heat, enabling them to survive in colder water for longer than many other shark species. Usually that would be an advantage but in this particular case, it may have been their downfall. Since they can cope with lower temperatures better than other sharks, threshers tend to stay in the coastal waters of Maine until late December long after other species such as makos or blue sharks have left for warmer climes.

Nobody knows for sure what killed the threshers but scientists suspect they were surprised by the sudden drop in temperature and as they scrambled to get south quickly, they may have beached. Or simply died of hypothermia.

Too hot to be a guy

Hypothermia is the least of the green sea turtles’ worries in the northern part of Australia’s Great Barrier Reef. Warm temperatures there have led to a massive gender shift among the animals. That’s because the turtles are among those species whose gender is determined by the temperature the eggs are exposed to during incubation. When it’s colder, they become male, when it’s warmer, they become female. A new study has found a staggering 99.1 percent of juveniles and 99.8 percent of subadults in that part of the ocean are now female, as well as 86.8 percent of adults.

By comparison, the population around the southern Great Barrier Reef is only 65 to 69 percent female. Unless the waters start to cool in the coming years, it may soon be “women only” for the turtles. That could have a devastating effect on the population once the juveniles reach adulthood and find very few, if any, male turtles to mate with.