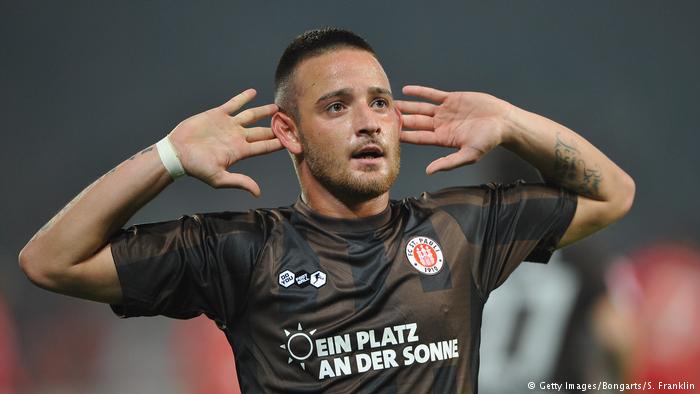 Deniz Naki has gone from one of Germany’s most promising footballers to hiding in a safe house after an attempt on his life. Naki’s political views have long had a big impact on his career. But how did it come to this?A little less than a decade ago, Deniz Naki was part of a German success story, named in the ‘team of the tournament’ as the country picked up a seventh European Under-19 Championship.

Naki lifted the trophy with the likes of Sven Bender, Lars Bender, Ömer Toprak and plenty of others still playing at the top level. But at the start of 2018, he’s now at the center of a story of a very different kind.

The 28-year-old with German-Kurdish roots was shot at while driving down the A4 motorway near his home town of Düren, in the west of Germany, on Monday. He told DW he is now in a safe place receiving police protection following the apparent assasination attempt, which is being investigated as attempted murder.

He was forced to duck before pulling over to the hard shoulder and surviving unharmed, before claiming that the attack was of a political nature.

“Turkish nationalist groups could be behind this act, I have no other suspicions,” Naki told DW on Tuesday, before expressing his fears about returning to Turkey. “I have become a target once again, I don’t know how people there will react.”

While it was initially reported by numerous sources that Naki was suggesting the Turkish secret service were involved in the shooting, his lawyer said this was false and the footballer “thought an ultra-nationalist Turkish group in Germany could be behind it.”

Even before the latest incident, controversy has never been far from the surface of the forward’s career, particularly in recent years. The former St. Pauli player has been a vocal critic of the Turkish government’s treatment of the country’s Kurdish ethnic group and a supporter of the Kurdistan Worker’s Party (PKK) – who stand for Kurdish nationalism but are considered a terrorist organization by the European Union.

Just last year, after initially being found not guilty less than a year earlier, he was handed an 18 month suspended jail sentence for promoting “terror propaganda” for the PKK on social media channels. Naki tweeted his opinion about a Turkish military offensive against the PKK and a curfew was imposed in seven cities in southeast Anatolia, in the west of Turkey.

Turkish President Recep Tayyip Erdogan’s treatment of dissidents has been condemned in many quarters but DW’s Acer says Naki’s case is unique.

“Until now it had often been journalists or academics or writers who felt threatened, but we haven’t heard of this happening with any other athletes,” she said. “So we can’t say concretely that athletes or sports figures are feeling under threat or in danger.”

Whether the threat is from government agencies or otherwise, Naki’s political beliefs, and the consequences of those beliefs, have had a significant impact on his career. A tally of eight goals in 12 games this season shows at least some of the ability that shone so brightly as a teenager remains, despite the lowly level at which he now plays.

After that European Championship win and a couple of caps for the German under-21 side alongside the likes of Toni Kroos, Jerome Boateng and Mats Hummels, Naki left Bayer Leverkusen for St. Pauli, a famously left wing club based in Hamburg. He was, and remains, a popular figure at the club but his stint is probably best remembered for his throat-slitting gesture during St Pauli’s 2-0 win over Hansa Rostock in 2009. Clashes between the two had long been dangerously charged, with the right wing elements of Rostock’s fan base opposed to the ideology espoused by St. Pauli, and the gesture was considered to incite violence.

Naki received a three match ban for that, nine matches less than he’d eventually get for his social media support of the PKK, and, after a brief spell at Paderborn, he moved to Turkey, the country to which he’d pledged his national team allegiance after a pair of caps for Germany’s under-21s — though he’s yet to win a cap for his adopted nation.

Soon after his move to Genclerbirligi, Naki was the victim of an attack, the reason for which was thought to be his Kurdish ethnicity. “They were swearing and asking: ‘Are you that dirty Kurd?'” Naki told the BBC after the 2014 attack.

“Then they said: ‘Damn your Kobane, damn your Sinjar’. I tried to calm them down. But suddenly one of them punched me in the eye. Trying to defend myself, I punched one of them back and started running away.”

He left the country a few days after, citing the possibility of further attacks as the reason for his departure.

“There is no tolerance. I would only go back because I love my country, I love my hometown. That’s it. I will carry on with my career in Germany,” he said at the time.

But it was a stone’s throw from his hometown of Düren that his car windscreen was struck by a bullet. “I always knew that something like this could happen, but I would never have thought it could happen in Germany,” he told German newspaper Die Welt on Monday.

Less than 48 hours after a gunman made him fear for his life, Naki’s future — both sporting and otherwise — is unclear, much like his assailant. What has become increasingly obvious is that he is a sportsman doesn’t seem prepared to separate his sport and his politics. The cost of that could have been, and still might be, enormous.