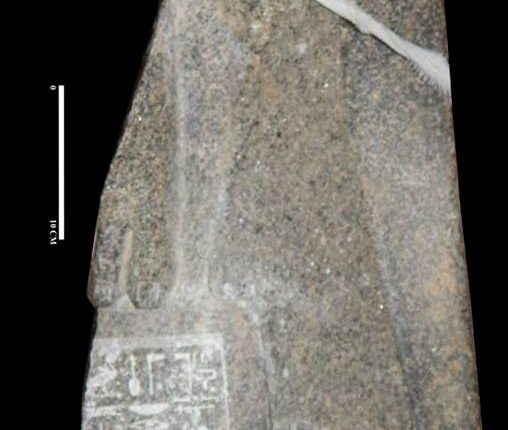 The Ministry of Antiquities announced discovering a part of an ancient statue in a parking lot in Sohag governorate, Upper Egypt, according to state media outlet EgyNews.

The ministry created a committee to study the found statue, headed by Moustafa Waziri, secretary-general of the Supreme Council of Antiquities, who assured that the statue dates back to the Eighteenth Dynasty.

The statue is made out of black granite and features the feet of Amenhotep III, a Pharaoh that ruled the family of Eighteenth Dynasty. The back of the statue showed carvings in Egyptian hieroglyphics, through which scientists discovered the details of the statue.

The writings referred to the dates of his birth and coronation, as well as his name. The statue portrays the Pharaoh’s left leg crossed over his right leg, a pose that the committee described as common among statues and portraits featuring pharaohs.

The committee announced that the area of the recently located stone is 22X27cm, and that it represents part of a lager stone statue.
The statue was transferred to the museum in Sohag for cleaning and restoration, while the remains of the statue are still being looked for.