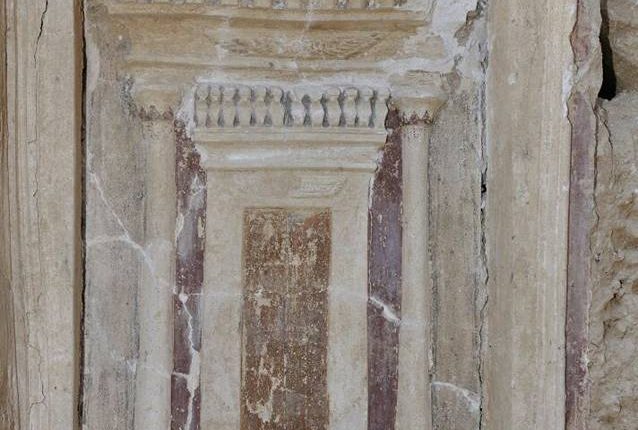 The Ministry of Antiquities announced discovering a collection of archaeological pieces and remains of tombs that date back to the Greco-Roman era in Al-Abd Theatre in Alexandria. The discovery came through an excavation work carried out in the Hellenistic cemetery.

The collected pieces, verified with lamps, depict scenes of deities and vessels that were used as offerings.
Mostafa Waziri, secretary-general of the Supreme Council of Antiquities, stated in a press release that the most important piece of this discovery is a tombstone that was once used to close one of the burial shafts.

From his side, Ayman Ashmawy, head of the Ancient Egyptian Antiquities Sector, explained the importance of unearthing the tombstone saying that it contains a number of sand and lime inscriptions that portray “the facade of an ancient Egyptian-style temple.”

The tombstone depicts a scene showing a staircase leading to the entrance and two columns holding the entrance roof. The staircase leads to an open door, one of which is a half-opening topped with a sun-disk winged decoration, the statement reads.

Al-Abd Theatre is an archaeological site that is known to contain several cemeteries and burials in it.

Ibrahim Metwally, head of the Egyptian excavation mission, added that the importance of the tombstone is owing to the inscriptions featured, in addition to the an evolution of the idea of imaginary doors that spread during the ancient Egyptian ages to mislead the thieves from the real door of the tomb. The tombstone is now under restoration as it is in a bad conservation condition.