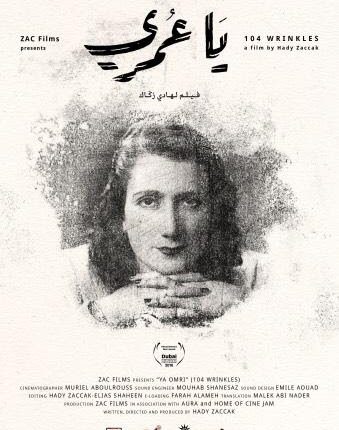 In a special tribute to the documentary that won several international awards, Zawya will screen Hady Zaccak’s film “Ya Omri” (104 Wrinkles), in which he followed his grandmother’s life since she was young until she turned 104.

The film won several awards, including the Jury Award at the Malmo Arab Film Festival in Sweden.
In his film, Zaccak depicts the change in time through capturing the main life events of an elderly lady. Through his camera, the director follows the path of his grandmother, Henriette, as she turns 104 and starts recalling her life since she was in Lebanon, through to her emigration to Brazil, and through love, marriage, and children. While the camera features the old wrinkles of her elderly face, Zaccak features the transformation of her memory.

The film is written and directed by Hady Zaccak, produced by ZAC Films, and distributed in the Arab world by MAD Solutions.
Before “104 Wrinkles” won the Jury Award at the Malmö Arab Film Festival, it won the Award of Merit at the Docs Without Borders Film Festival in Nassau, USA and an Appreciation Award at the Impact Docs Awards.

CCDC celebrates the end of 5 Ra2s