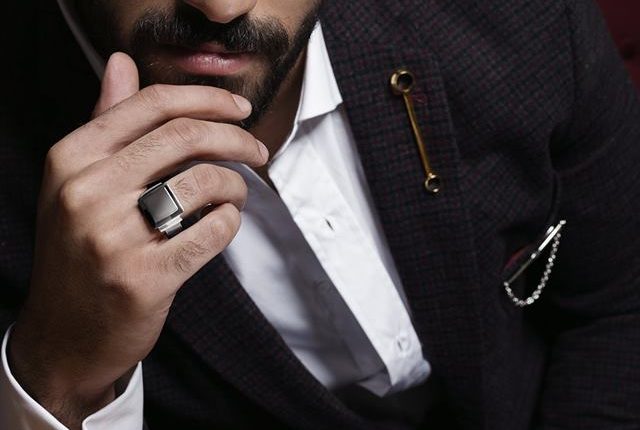 A quick flip through the month’s regional fashion magazines would most likely end with a long pause in front of a geometrical creation of statement eyewear. With silver frames and unexpected silhouettes, the handmade piece of accessory is worthy of being categorised as an independent trend.
From silver-screen celebrities to regional fashion experts, the memorable sunglasses crossed the borders of niche audience to walk in the streets of Cairo, Beirut, Dubai, and even Paris.

Accordingly, it was not long until the eclectic designs grew to become a cohesive eyewear range with a wide spectrum of colours and styles.

Amr Saad is a jewellery designer that preferred to associate his debut collection with a true challenge. Rather than focusing on his jewellery design specialty, the designer started his career aiming to redefine eyewear before finally diving into his magic.

“I was waiting for the right approach to go back to jewellery. I preferred to start with the bigger challenge, eyewear, before developing into a full-on accessories brand. For me, jewellery is a form of expression rather than mere pieces,” said the designer.

According to Saad, jewellery always has a strong story behind it. Since it is common that people prefer to wear inherited pieces or those that represent certain milestones, the designer wanted to walk into this market with a solid concept. Accordingly, he took his time to research and settle on the right angle. On the other hand, Saad wanted to remain faithful to his already well-established eyewear line.

Despite the novelty of wearing silver-made eyewear, the designer’s refined technique and diligence to keep each piece practical in terms of weight and design, have successfully overcome the local market’s initial doubts.

“Mastering the artistry of eyewear and completely understanding the associated details were not easy tasks. However, the overall process has yielded a great experience that created the sought-after statement,” said the designer with a relaxed half smile.

After being known for his avant-garde eyewear, Saad decided to explore a new territory with his most-recent release. The “Gentlemen Collection” is the designer’s first jewellery and eyewear offering. Together the pieces show a timeless attribute; supported by minimal and geometrical silhouettes.
“The brand embraces three different themes. The new collection falls under the trendy umbrella. It addresses gentlemen, their eye for details and keenness on the versatility of unisex designs. It is made to be worn everyday rather than being a loud statement. Even the included four eyewear designs take a different approach when compared to previous ones,” explained Saad.

That said, the designer’s intensive research has also taken him as far as including a flask and a scissor in his collection. According to Saad, it was quite vital that this collection would expand to encompass each and every detail invested in the lifestyle of gentlemen.
“I personally love minimal pieces, which can still make a subtle statement. My favourite piece is this silver geometrical ring; while it is quite simple, it still has an evident persona,” said the designer while inspecting his pinkie ring.

Craftsmanship is an undivided aspect of the brand. While following a progressive aesthetic, the designer still favours classic manufacturing techniques, which depend on precise artistry and intricate details. As for his materials of choice, the designer does not plan to give up on his preference of valuable materials that can survive a lifetime.

“Gold and silver are the metals that I prefer to use for being natural. Meanwhile, other materials require different models of production that I do not necessarily embrace as a jeweller. That said, I can work with copper; but, I do not prefer it since I would rather utilise precious materials,” said the designer.
After an evident positive feedback and a number of praising media features, the designer is only occupied with his next move. Now that his brand is undoubtedly a destination for both eyewear and jewellery, he plans to start incorporating new techniques and materials.
“We have an upcoming jewellery collection, which is set to take a fancier approach. The Royal Collection will also include a couple of eyewear designs and is scheduled to come out next year,” said Saad with apparent excitement.

The archives series: a visual walk down memory lane