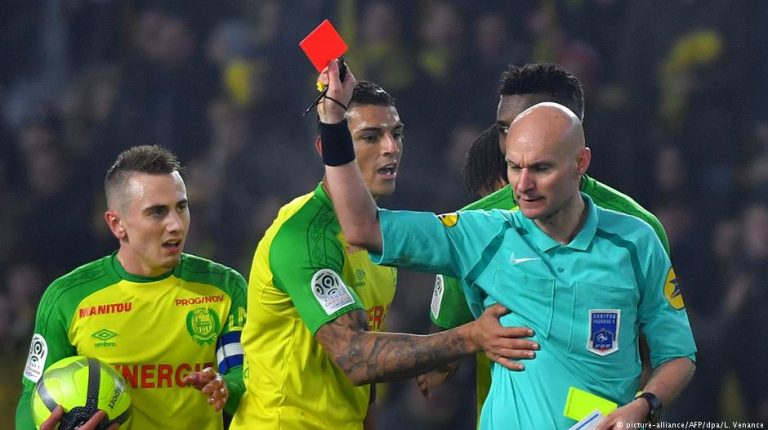 French football authorities have banned referee Tony Chapron “until further notice” after a bizarre incident in a match on Sunday. Chapron aimed a kick at a Nantes player in their match against Paris Saint-Germain.With the game in injury time and his side 1-0 down to runaway league leaders PSG, Nantes’ defender Diego Carlos was dutifully tracking back as Kylian Mbappe hared towards goal.

With the focus on the young French striker, fans and those watching on TV were shocked to see Carlos, some way behind play, shown a second yellow card and dismissed. But replays showed that the Brazilian had collided with referee Tony Chapron, who cut across his path. As the official rolled across the turf he swung a leg at Carlos, catching him before rising to give the defender his marching orders.

The French Football Federation (FFF) said Chapron, 45, would be “withdrawn… until further notice” and would be called to appear before the French league’s disciplinary commission. The federation said Chapron has now accepted the contact with Carlos was accidental and the second booking has been rescinded.

“At the time of the collision, I felt a sharp pain where I had recently suffered an injury,” Chapron told AFP on Monday. “My unfortunate reaction was to stick my leg out towards the player.”

The bizarre nature of the incident saw it spread rapidly on social media, with even former Real Madrid goalkeeper Iker Casillas cracking a joke at Chapron’s expense: “Surely the good man will have apologised. It was spontaneous,” he wrote on Twitter. “That said, for me it’s agression and red! Three matches minimum!”

As it turns out, Chapron’s ban could be much longer, especially if Nantes midfielder Valentin Ronigier has his way.

“He says he slipped, but I know he kicked him,” Rongier told French TV station Canal Plus. “I know it’s very difficult to referee but you have to question them from time to time… We do that, we get a 10-match ban.”

Chapron will definitely miss Wednesday’s Ligue 1 game between Angers and Troyes, which he was slated to take charge of.