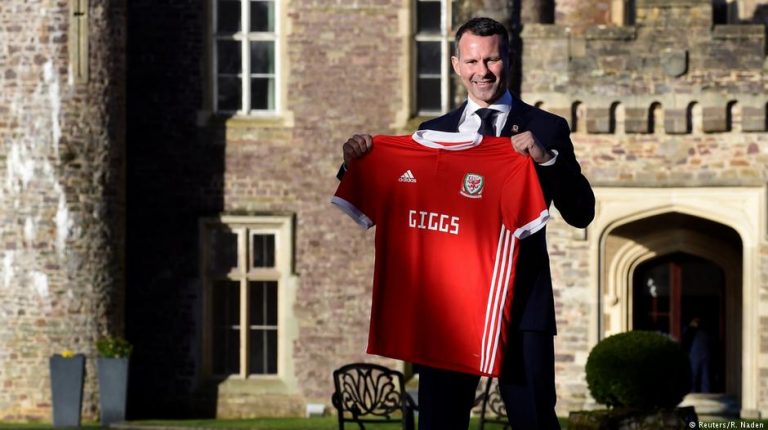 One of Wales’ greatest ever players has become their coach, after Ryan Giggs was appointed on Monday. The Welshman spent his entire playing career at Manchester United and has landed his first permament coaching job.He’s never been in charge of a club side but Ryan Giggs has been handed a four-year contract to replace Chris Coleman as Wales boss.

Coleman quit the post in November after Wales failed to make the World Cup and his replacement is keen to get started.

“It was an opportunity I couldn’t turn down,” the former winger said. “I had the assistant role at Manchester United after I finished playing, which I enjoyed.

“I’ve not done that for 18 months now and I was just itching to get back into football because that’s where I feel comfortable.”

While Giggs is widely considered to be one of the best players to pull on a Wales shirt, he often drew criticism during his 64-cap playing career for regularly pulling out of squads for matches, particularly friendlies.

“I know the criticism is going to come and the way to combat that is to win games and give it my all, which I’ll do,” he said. “All I can do is work as hard as I can to produce a winning team.”

Though he is one of the most highly-decorated players of all time, with 13 Premier League titles and two Champions League wins among his honors, Giggs never played at a major tournament.

In fact, it was his predecessor that led Wales to their first tournament in nearly 60 years at Euro 2016, where Wales overachieved in reaching the semifinals. Giggs will hope to repeat the trick for Euro 2020 and is likely to lean heavily on the talents of Real Madrid forward Gareth Bale and Arsenal’s Aaron Ramsey.

While Giggs spent two seasons as Louis Van Gaal’s assistant at United and took charge of the final four games of the 2013-14 season after David Moyes was sacked, he has no experience as a head coach and was overlooked for the Swansea City job earlier in the season.