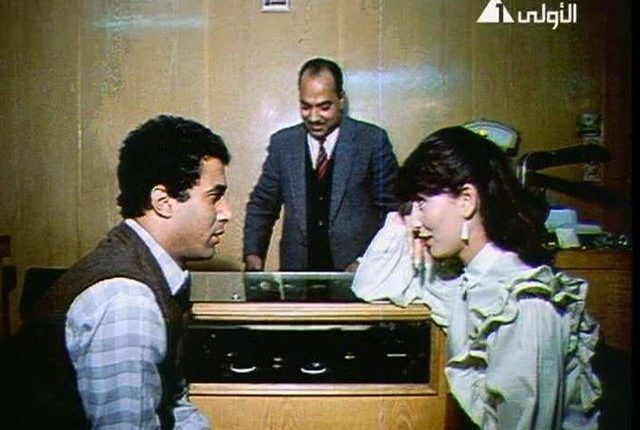 In the previous two articles of this series, I highlighted how the representation of the victim figure is made possible either by the formation or the deformation of a relationship with the victimised person. I discussed how the invisibility of the victim is broken amid a fundamental change that occurs in the nature of human interactions between the different characters of the analysed movies.

In this week’s review, I will tackle another contradictory way through which the victim is formulated in Egyptian cinema. In Naguib Mahfouz’s short story Al-Hub Fouq Hadabet El-Haram (Love on the Pyramids Plateau), adapted into a film that carries the same name, the visibility of the victim can also be produced by the non-change. Directed by Atef El-Taieb and written for the screen by Mustapha Muharram, the film shows that silenced feelings and absent undeveloped relations are significant tools to discover the sufferings and the grievances of Ali Abd El-Sattar—portrayed by Ahmed Zaki.

Ali is bored and frustrated. He is not satisfied with his job as a government clerk. He graduated from the school of law, which he did not even wish to join from the beginning. Ali has been forced to work for a place where the audience, along with him, do not know what it is supposed to do or what the tasks assigned to its employees are. As a result of this ambiguity, Ali finds plenty of time to leave his office during official working hours. He walks into the streets of downtown Cairo to check out girls. Reaching his late 20s without “touching a woman”, as he said during a sexual dream, Ali has severe psychological and physical pressures that urge him to quickly get married.

This is another absent relationship that helps the audience know more about Ali. It is an absence that forces Ali to search for a solution, any gate to exist the victimhood of his poverty that prevents him from having a family. Hence, he abandons his already married colleagues—with their marriage problems that intensify his sexual desire—to a coffee shop to meet his friend Abu El-Azm. Played by Ahmed Rateb, Abu El-Azm is poor like Ali. Unlike Ali, however, Abu El-Azm chooses an “easy” solution by hooking-up with an old rich woman.

The refusal to form a similar available, yet “unreligious” and “unromantic” relationship, was followed by Ali’s visit to public intellectual and journalist Atef Hilal, played by Salah Nazmy. At this point, it is important to illustrate the self-criticism conducted by script writer Mustapha Muharram, and inspired by novelist Naguib Mahfouz, of writers who on the one hand claim to represent the social and economic problems of their communities, but unfortunately fail to form personal human interactions with the victims of such problems.

As reflected in a few scenes of the film, Hilal is living in an ivory tower with his shisha, pen, and self-confident tone. Sometimes he criticises Ali’s generation for its laziness and rejection of older people’s “wisdom.” On other occasions, Hilal talks about abstract moral codes, and asks Ali to wait for long-term “ethical” solutions to get married to his new, “real” love, Ragaa—portrayed by Athar Al-Hakim. Finding himself moving to a hassle that does not directly address his need for money to buy a house or to pay Ragaa’s dowry, Hilal’s words drive Ali to angrily confront the socially “enlightened” man with his miscommunication with and misrepresentation of the younger generations.

Now despite—or because of—all these absent relationships that are augmented by the inability to convince his and Ragaa’s families of his marriage, Ali decided to secretly manage his life away from the “silly” traditions of his society. With the exception of Allah, he learns that he does not need to announce his relation to Ragaa to everyone, not telling anyone. Because this would lead to a permanent absence of his relationship with Ragaa, Ali figures out that he does not need to wait for any recognition or acceptance of his marital status.

Consequently, Ali escapes with his wife the noise and the crowd of the streets of Cairo to kiss and to hug her. Breaking Ragaa’s insecurities but also his own fears, Ali aims to put an end to the immobile and stagnant rules that oppresses his feelings, desires, and aspirations. He discovers that the absence of an intimacy between him and Ragaa can be solved when discarding and disregarding other relationships. As will be further argued in the coming weeks, a creative change and formation of the place can be very useful for the victims to be visible and to criticise how they are represented. Because he got extremely tired of finding a bedroom, a living room, and a kitchen to make up a home, Ali imagines such division somewhere else: there, above the pyramids plateau.