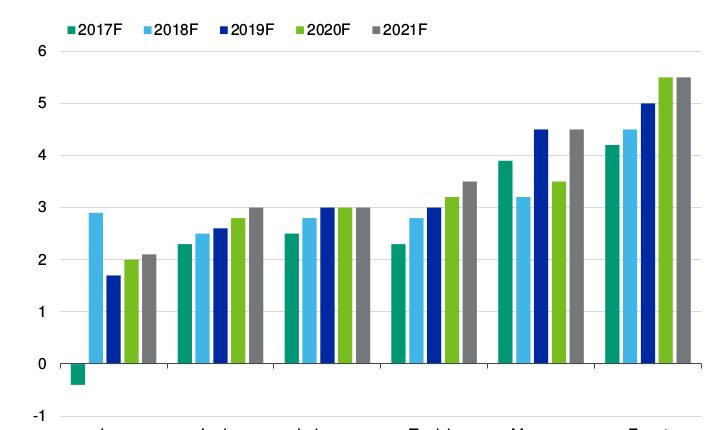 Egypt is expected to record the highest growth in the Levant and North Africa region, accelerating from 4.2% in 2017 to around 5.0% by 2019 and 5.5% by 2021, according to a report published by Moody’s Investors Service on Tuesday.

Moreover, the report indicates that the forecasted growth is due to the fact that the structural reforms support more broad-based activity compared to the mostly consumption-driven pre-reform growth model.

The main driver behind the restoration of Egypt’s economic competitiveness was the Central Bank of Egypt (CBE) decision to float the Egyptian pound in November 2016, the report states.

Consequently, Egypt’s exports increased by around 16% in 2017 compared to 2016. However, the price of implementing these reforms has been high inflation and falling purchasing power, which Moody’s believes will curb the contribution of consumption to growth.

Yet, Moody’s analysts believe that the restored external price competitiveness, accompanied by structural competitiveness improvements led to the improvement of Egypt’s ranking in the World Economic Forum’s Global Competitiveness Index to the 100th rank in the 2017/18 survey, which also put Egypt as the most improved country in the region. Such improvement should support further foreign direct investment (FDI) inflows to help fund the country’s significant infrastructure investment agenda.

“We expect the debt [to GDP] ratio to peak at 100% of GDP in 2017 and to decline thereafter, reaching 83% of GDP in 2021 as a result of fiscal consolidation and higher growth,” the report states.

Moody’s estimates that the start of production from the mega Zohr field—which will have the capacity to secure almost all of Egypt’s domestic gas needs to fuel power plants—will further drive a structural improvement in the current account deficit to around 3.0% of GDP by 2021 from 6.8% in 2017.

In terms of political risks, the report maintained Egypt’s rating at “High”, due to the uncertainty of future reform momentum following the presidential election due to be complete by May 2018. Moody’s believes that pressure from the young population—facing high unemployment and inequality—could exert pressure that slows or even reverses reform. However, the report downplays the risk of another public uprising in the short term.