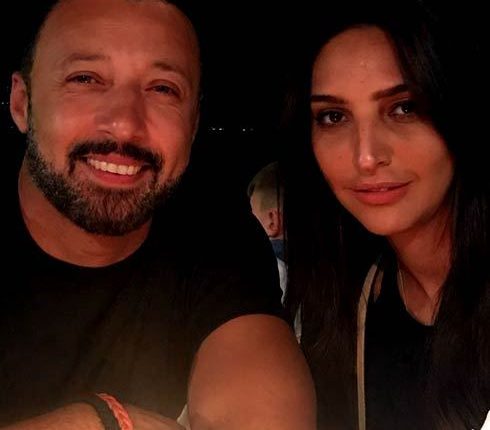 “A man has to put a limit to his woman’s ambition, she cannot be left ‘having fun’ without limits,” said Egyptian artist Ahmed Fahmy in an interview, which ignited rage against him on all of social media platforms accusing him of being an ignorant, controlling, typical eastern man.

In his interview with the program “Ana W Ana” (Myself and I), aired on a privatively-owned channel ONTV, Fahmy spoke about his personal life, discussing the details of his relationship with his wife. In the interview, he discussed how women should be controlled and led by their spouses, spotlighting the crisis of oppressed women in the Middle East, even the wives of well-educated, elite artists.

Fahmy’s wife, Amira Farrag, participated in the interview with a video sharing her side of the story, recalling the beginning of their relationship and their 20-year journey, during which she had to let go of many essential things in her life, “because he wouldn’t agree to them.”

“I met Ahmed when I was in high school at Cairo Opera House where I used to sing. His first request was to leave the field of singing because he wouldn’t allow me to be a part of this field,” she said.

Fahmy, who is mostly known as a singer, explained the decision of asking his wife to drop the field she loves the most by saying he “can’t stand being with a wife with a large fan base.” When asked about the reasons why he himself could work in a particular field while not permitting his wife to be in the same one, he replied that after discussions, he allowed her back, “with certain rules.”

His wife talked further about his actions, which she says she accepts and loves, saying that after getting married, he prevented her from maintaining male friends, who had been a part of her life for a long time and her parents had known them for several years. Moreover, she added that he controls the way she dresses, stressing that she has to wear long sleeves and closed gowns.

“If the definition of an eastern man is someone who gets jealous over his wife, then I am one, definitely!” Fahmy commented on his wife’s words.

The interview caused widespread controversy on social media and Fahmy was showered with a barrage of attacks, while critics also accused his wife of accepting “unbearable living conditions.”

“I knew this type of control exists in life but I thought it is only limited to less educated social classes, who would define these actions as manhood. But to find them in Egypt’s supposed elite and most educated social class, this is just shocking,” one commenter wrote on Facebook.

In the interview, Fahmy also asserted that one of the ongoing heated discussions between them, is when they are heading to a certain place in their car and they stop to ask for directions.

“She can’t ask someone for directions, what sort of a man is sitting beside her if she does?” he questioned.

The online reactions varied between men supporting his actions and women who find him radical.

“What’s even worse is that lots of men would agree with him. [They share] toxic masculinity, double standards, gender roles, power struggles, and sensitive egos. And the other problem is
that women accept this because they don’t know any better, they take one for the family, the marriage, or the man himself” another comment stated.

The controversy opened the door to spotlighting women’s points of view regarding these actions from their spouses.

Fatma Kheir Allah, a 25-year-old housewife, defended Fahmy and Amira, saying that what they share is a healthy relationship of a man who is jealous and a woman who respects and appreciate her man’s fear.

“I live a similar experience and I can assure that what the world sees as a controlling man with double standards is actually a caring husband who wants to protect his wife from dealing with all sort of indecent people,” she told Daily News Egypt.

Kheir Allah pointed out that at the beginning of her marriage, her husband did not allow her to go out alone, to work, or to wear certain types of attire. However, she finds that his reasons for doing so is only due to “his fear of something bad happening to me,” adding that she never feels like he forces her into anything without discussing it.

“At the beginning I thought he’s trying to control me, but later, I understood that this is only out of love,” she commented.

She also asserted that she would not consider her husband a “proper man if he hadn’t acted the way he does.”

“I grew up in a house where my dad controlled and commented all the time about they way I dress and act, so getting married to someone who acts in a similar way suited me and I never found it unacceptable,” she added.

On the other hand, Shaimaa El-Masry, a 33-year-old journalist, said that everything she agreed to at the beginning of her marriage, believing it was out of love, turned out—10 years later—to be complete control and enforcement of what her husband believes to be “proper attitude”.

“I got married at a very young age. He was the first man in my life and before him I had no experience, so I blindly applied his orders believing that this makes me a good, loving wife,” she said.

The first rule El-Masry’s husband, Ahmed, asked for before getting married was for her to get veiled, change the way she dresses, and to stop communicating with any other men.

“I currently realise that he did not ask for this based on religious purposes or because of jealousy—as he tried to convince me—but mainly because these are the things that intimidated him the most in me,” she explained, adding, “I did get veiled without being convinced, just for his sake, but this was just the beginning of a long journey of him trying to box me in order to prevent my superiority.”

In a ten-year marriage, El-Masry’s husband enforced several requests that “made no sense…he would ask me to walk in the middle of the street, just to avoid walking beside men who are walking on the pavement,” she explained.

Refusing to apply his rules was constantly a main struggle in maintaining their marriage. Insisting on her working was always an unresolved issue between them.

“I worked due to our financial situation; that was the only reason he agreed. However, with every successful step I take in my career, the intensity of our argument would get sharper, making me realise that the only reason he ever stopped me from working was because of his insecurities,” she pointed out.

She said that linking her happiness to her inferiority is the main key to continue her marriage to “this person.”

After the controversy took over social media, Fahmy tweeted that he has an extremely happy relationship with his wife, stressing that the aired interview has been edited to portray his comments out of their original context.