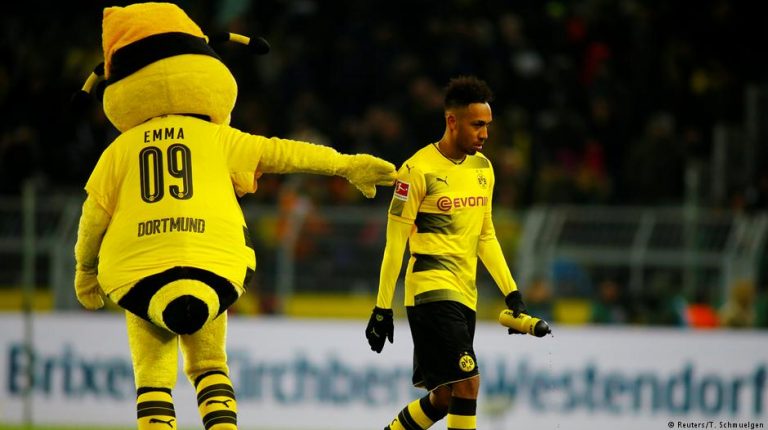 With both parties locked in a stalemate over his future, Pierre-Emerick Aubameyang and Borussia Dortmund are heading towards a showdown. The Gabon international’s next decision could define his career.”Auba has to clear it up with the head coach as to whether he’s ready to give his all for Borussia Dortmund or not,” stated club chairman Hans-Joachim Watzke after he was omitted from the Wolfsburg squad on Matchday 18 in the latest in a string of disciplinary issues involving the striker.

In hot water with the club’s hierarchy and intent on forcing through a move, Aubameyang’s behavior of late is starting to create an untenable situation for the club, who find themselves stuck between the proverbial rock and hard place.

Too important and too detrimental?

The 28-year-old’s goals are a precious commodity and, while Die Schwarz-Gelben are happy to reap the benefits of his goalscoring exploits, the negative press, the disciplinary issues and the unrest he’s fostering beg the question: Is Aubameyang now more of a detriment than an asset for Dortmund?

This season, Dortmund have struggled to pacify the problem and no conspiracy theories were needed to correlate Dortmund’s eight-game winless streak with Aubameyang’s dry spell.

However, despite recent events, ‘Auba’ remains one of the most popular personalities in the BVB dressing room and, for now at least, head coach Peter Stöger is planning for the future with the club’s top goalscorer in mind.

“For me it’s just logical [that Aubameyang stays at Dortmund],” Stöger told the press assembled at the club’s training ground on Monday. “I expect everything to be as it was. He’s a Dortmund player, he trains and he’s in our plans for the upcoming match.”

But what options does Aubameyang have at his disposal? Step up, step down or settle for a stalemate. Here are the top five…

Does scoring 98 goals in 143 Bundesliga appearances outweigh being suspended for disciplinary reasons three times in the last 15 months and compounding the rising tension surrounding the club?

“At some point you can’t tolerate it [the lack of discipline] anymore […] It can’t go on like this,” said sporting director Michael Zorc in a damning assessment of the situation.

‘Auba’ has clearly burned bridges at BVB, who have three options: Sell him, bench him or play him. A decent offer is worth consideration after what could prove to be the final straw, but Dortmund can’t leave themselves short-handed in the second-half of the season.

Aided by the influence of Dortmund’s former head scout Sven Mislintat, who joined Arsenal back in November, the Gunners are the favourites should he decide to cut his Dortmund stay short.

Touted as a potential replacement for Alexis Sanchez on the left, Aubameyang’s skill set out wide would be more along the lines of Thierry Henry, though he’s at his best with space to work with. More likely is that the Gabon international will be competing with Olivier Giroud, Alexandre Lacazette and Danny Welbeck for game time.

‘Auba’ didn’t help his cause by jokingly asking English youngster Jadon Sancho, “Can you bring me to London one day? You know, just for fun!”, on a recent Instagram story. This saga still has legs in it.

In an interview with L’Equipe in February 2016, Aubameyang discussed his dream of “one day playing for Real Madrid”, going on to explain that, “in 2014, shortly before my grandad, who came from Avila just 100 kilometers from Madrid, died, I promised him that one day I’d play for Real”.

Dortmund have denied there being any contact between the clubs on multiple occasions, yet interest cooled when the 28-year-old admitted: “I don’t want to talk about Madrid anymore. They don’t want me.”

The likes of Kylian Mbappe and Neymar are more attractive options for Real.

It’s a destination the rumor mill continuously links Aubameyang with, but only if money is his sole motivation does China become a viable option.

He admitted to “not taking the offer seriously”, when previous overtures were made and, with the likes of Carlos Tevez describing his time in the Chinese Super League as “a holiday”, it’s hardly the place to be if the he has ambitions of taking his career to the next level.

There was concrete interest from Paris-Saint Germain during the summer until sporting director Patrick Kluivert was replaced by Antero Henrique.

“I met with the PSG president Nasser al-Khelaifi in early June,” Aubameyang told French radio station RMC. “When the new sporting director arrived they both decided that they actually didn’t want to bring me into the fold.”

With Edinson Canvani regularly linked with a move away for a club, the Laval native would be high on the list of replacements, but it’s hard to see any deal being done in the January transfer window.