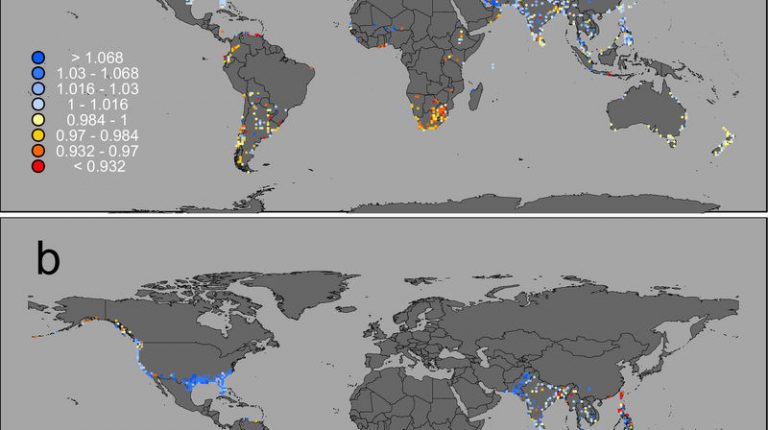 An international team of researchers analysed over 2.4m annual count records of 461 waterbird species across almost 26,000 sites around the world. The team found that ineffective national governance is a better indicator of species decline than any other measure of “anthropogenic impact”.

Led by the University of Cambridge, the researchers found that even protected conservation areas make little difference in countries that struggle with socio-political stability.

The research studied changes in global wildlife over almost three decades and found that low levels of effective national governance are the strongest predictor of declining species numbers, more than economic growth, climate change, or even overpopulation.

Published in the journal Nature, the study shows that protected conservation areas maintain wildlife diversity only when situated in countries that are reasonably stable politically with sturdy legal and social structures.

The fate of waterbird species since 1990 was used in the study as a bellwether for broad biodiversity trends, as their wetland habitats are among the most diverse as well as the most endangered on Earth.

Findings of the study were compared to the Worldwide Governance Indicators, which measure everything from violence rates and rule of law to political corruption, as well as data such as gross domestic product (GDP) and conservation performance.

Based on the vast dataset, the researchers found that waterbirds have seen greater decline in regions where governance is less effective, such as Western and Central Asia, South America, and sub-Saharan Africa. However, the healthiest overall species quotas were seen in continental Europe.

What gives this study its importance is that this is the first time that effectiveness of national governance and levels of socio-political stability have been studied and identified as the most significant global indicator of biodiversity and species loss.

Waterbirds are a diverse group of animals and include species from ducks and heron to flamingos and pelicans. Their wetland habitats cover some 1.3bn hectares of the planet, from coasts to freshwater and even highlands, and provide necessary ecosystem functions. Wetlands have also been degraded more than any other form of ecosystem, according to the study.

Waterbirds have a long history of population monitoring. The annual global census run by Wetlands International has involved more than 15,000 volunteers over the past 50 years and the National Audubon Society’s annual Christmas bird count dates back to 1900.

“Although the global coverage of protected areas continues to increase, our findings suggest that ineffective governance could undermine the benefits of these biodiversity conservation efforts, and we now know that governance and political stability is a vital consideration when developing future environmental policies and practices,” says Tatsuya Amano, the lead author of the study who led the Cambridge team and a professor at the university’s Department of Zoology and Centre for the Study of Existential Risk, according to Cambridge’s press release.

According to the study, there is a relationship between the speed of GDP growth and biodiversity, as waterbird decline is greater amid growing GDP per capita.

a, b, Mean annual changes in abundance for 373 migratory (a) and 88 non-migratory (b) waterbird species (that is, community-level changes). The migratory status of each species was assigned using the BirdLife Data Zone (see Methods).