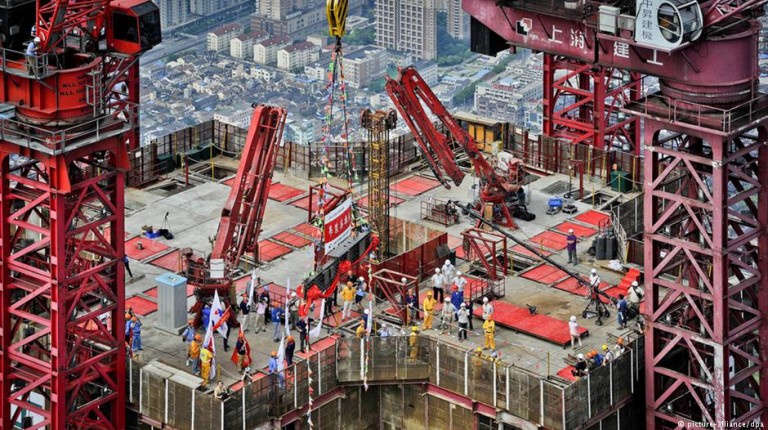 China’s GDP grew 6.9 percent in 2017 — the fastest pace in two years and higher than expected by analysts. The economy’s strong rebound came despite efforts to curb financial risk from excessive debt growth.Last year, China’s gross domestic product (GDP) overshot the official government target of about 6.5 percent, accelerating from the 6.7 percent growth seen in 2016, which was the slowest for more than a quarter of a century.

Although some analysts generally express skepticism about China’s official GDP figures, they agree that the rebound to 6.9 percent in 2017 shows China has gotten back on course for robust economic expansion after slowing down since last posting double-digit growth in 2010.

“The national economy has maintained the momentum of stable and sound development and exceeded the expectation with the economic vitality, impetus and potential released,” said National Statistics Bureau head Ning Jizhe as he presented the latest GDP figure on Thursday.

Ning also noted that the world’s second biggest economy was however still facing “difficulties and challenges” and that improving quality and efficiency would remain “a daunting task.”

The 2017 reading beats the expectations of most analysts, who had predicted the Chinese economy to expand by just 6.8 percent in various consensus forecasts.

Read more: China trade surplus drops, but not with US

It follows strong trade data last week, which showed the humming global economy had propelled China’s export machine. In a note to investors, Wei Yao, chief China economist at Societe Generale, expressed the view that the momentum of growing external demand may “carry on well into 2018.”

The latest figures also show that the services industry grew 8 percent for the year with retail sales spiking 10.2 percent. That was good news for Beijing’s push to change its economic model, which aims to give sustainable, consumption-based growth preference over debt-fueled investment and export growth.

But analysts warn that the trade-off between growth and a significant slowdown in credit stimulus will get tougher this year, with a slowing property market and tighter controls on local government infrastructure spending expected to drag on the economy.

“Debt is the biggest risk China faces right now,” said Hu Xingdou, an economics professor at the Beijing Institute of Technology. “Both state-owned enterprises and other Chinese enterprises have a high debt ratio, which will have a huge impact on the formation of bad bank debt in the future. There may be a risk of a financial crisis,” he told the news agency DPA.

The International Monetary Fund has also recently warned of risks stemming from China’s ballooning debt, saying that each extra dollar of debt is producing diminishing returns for China’s economy.