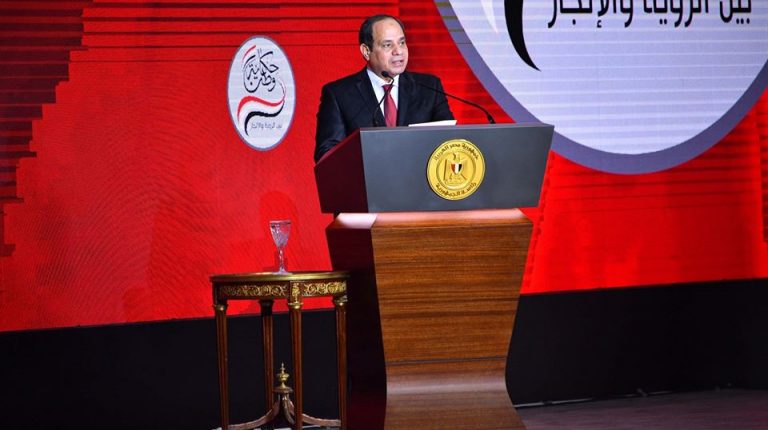 Within the few upcoming months, a new presidential term will begin, either with the current leader or a new one, but regardless of who occupies the presidency, new challenges are awaiting.

In 2017, internal issues existed in various fields, most importantly in living conditions, as well as the poor security situation amid a strategy to combat terrorism. Politics and freedom of press also disappeared from Egypt in 2017, justified by the challenge of maintaining security being more important.

There are several topics that have to be considered by whoever will occupy the presidency in the next term. These challenges were a feature throughout the past four years, while the state attempted to overcome problems that arose as a result of the country witnessing two revolutions.

President Abdel Fattah Al-Sisi, who took office in 2014, began his first term with the challenge of fighting terrorism and improving the country’s economy which deteriorated after the 25 January revolution.

Al-Sisi made great promises regarding Egypt’s economic future, ensuring the public that he would put the country back on track towards a future of prosperity.

However, the economy’s recovery, both in speed and in substance, has been weak. With tourism at an all-time low, and a scant amount of foreign direct investment due to concerns over political stability and security, Egypt’s problems have multiplied while its economy has declined. The state has implemented its economic reform programme which has created fresh struggles for people’s livelihood.

Daily News Egypt interviewed a number of experts to inquire about what people should expect from the upcoming term. It was agreed by several professors of different specialisations that the economic situation comes at the forefront of the challenges, as it imposed a lot of burdens on state expenses.

The most prominent economic obstacles include the lack of foreign currency, the devaluation of the Egyptian pound’s value against the US dollar, a tourism sector that is slowly dying, the increase of prices for the majority of basic goods, and bureaucracy and corruption, which Al-Sisi himself admitted was the main obstacle to achieving growth during previous interviews.

Currently, there are already major price hikes on products and services, which are expected to increase. There is also weak support for the industry sector, a reduction in industrial output, as well as absence of tourism.

Politician Samir Ghattas said, “Egypt’s external debt reached $81bn. We pay a 31% interest rate from the state budget; this is a big number,” stressing that the biggest economic challenges Egypt is facing in 2018 are its debts.

“I have no idea what the national strategy is to confront this issue during the upcoming months,” he continued.

On the other hand, Mokhtar Sherif, economics professor at Al-Mansoura University, said that we can address external debt by increasing our growth and production, but what is really challenging is the major increase in population, as we need to provide more economic growth for those citizens.

The Egyptian population reached about 104.2 million, of which 94.7 million are living in the country and 9.4 million are abroad, said Abu Bakr Al-Gendy, head of the Central Agency for Public Mobilisation and Statistics (CAPMAS) in September.

Moreover, member of parliament’s economic committee Mohamed Badrawy said, “there is no indication that next year will see an economic boom that could make an improvement in the economy and price hikes will not decline next year, but will see a 10% increase if the government succeeds in reducing inflation”.

The economic situation was not the only controversial issue last year, as the weak political scene in Egypt was regularly raised. Political science professor Hassan Nafaa said that there is already a political vacuum, and this will definitely continue to be a challenge during the next stage. “The role of political parties and non-governmental organisations is very weak, and there is not any mechanism that could activate democracy in the country,” he said.

Throughout the past year, it was significantly recognised that the performance of opposition groups in Egypt has been weekend and that they were not represented in any of the state’s major events.

Political science professor Ahmed Abd Rabo wrote in an op-ed in privately-owned Al-Shorouk newspaper, “it is not new if we compare the year 2017 with previous years in terms of politics: the restrictions on civil society continue, the file of rights is constantly declining, as well as the constant tracking of political activists and some cadres of political parties, and the message is clear to all: the regime’s only message is security with no room for politics.”

When asked about restrictions on civil society, Al-Sisi and senior officials clarified that this comes as part of combating terrorism, as some foreign parties could exploit opposing stances to distort the country’s image.

As for the regional landscape, Egypt has participated in several talks that aimed at finding possible solutions for the Syrian, Iraqi, and Libyan crises, as well as the Palestinian issue.

Political science professor Tarek Fahmy said that Egypt should be more “decisive” in the next period, and should make direct decisions. His statements implied that we should put an end to all talks and instead focus on resolving all issues, such as the Nile water issue with Ethiopia and disputes with Sudan over Halayeb and Shalateen.

“I believe that the performance of Egyptian diplomacy throughout Al-Sisi’s first term was perfect, and he constructed and implemented the basis that would put the country’s foreign affairs on the right track. A decisive role is what Egypt should consider in the next term to end all conflicts,” he said.

Meanwhile, Ghattas said that Egypt would focus on continuing what Al-Sisi has previously said concerning the “deal of the century.”

Al-Sisi announced on Friday his intention to run for a second term. The announcement came at the end of a conference where Al-Sisi and the Egyptian government presented a list of accomplishments in different fields.

He called on Egyptian voters to go to the polls to “show the world the size of participation in the election,” regardless of the candidate they choose to support.

“I promise you that the upcoming presidential election will be a model of freedom and transparency, and that the candidates will have equal opportunities,” he said.

Among the achievements, Al-Sisi said that 11,000 national projects have been implemented in the country over the past four years, with an average of three projects a day, worth EGP 2tn. He also cited that a total of 600,000 housing units, worth EGP 100bn, have been constructed, and roads and bridges have been built at a cost of over EGP 85bn.

He also presented four points the Egyptian state was determined to achieve including creating jobs for millions of youth in order to withstand workers returning from areas of conflict, utilising national projects and companies to do so.

Second, the Egyptian state wanted to present the country as one that can withstand and handle the conflicts in the region. Third, the state worked on building strong infrastructure for industries, such as roads, the new Suez Canal, ports, airports, and industrial areas. The fourth point was protecting the Egyptian state from different threats.

Ahmed Shafiq, the former prime minister, has renounced his plans to seek the presidency, after earlier announcing that he would run.

Several campaigns held by some members of parliament and supporters of the sitting president have been mobilising to collect signatures to demand that he run for a second term in the upcoming presidential election of 2018, to continue “building the country and facing the challenges.” The campaigns have so far been free to mobilise and organise rallies, conferences, and visits to governmental and private institutions.

Egypt’s National Electoral Commission (NEC) announced, during a press conference, that the election would begin abroad on 16 March and on 26 March within Egypt. Elections inside Egypt will take place along three days, from 16 to 18 March abroad, and will continue inside Egypt from 26 to 28, and the results will be announced on 2 April.