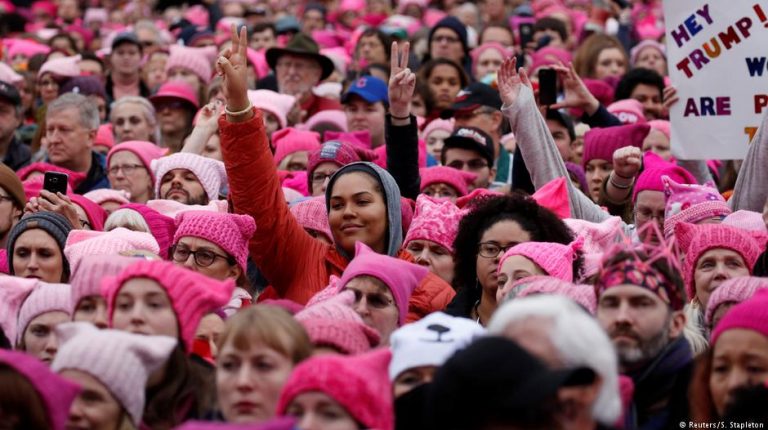 A quickly-organized demonstration against US President Donald Trump grew to be the largest protest of its kind in American history, overshadowing his inauguration. A look at its continued relevance, one year on.On November 9, 2016, a young woman in Hawaii created a Facebook event that would circulate around the world and inspire millions of people to take to the streets. What would later be known as the 2017 Women’s March was conceived just after the news had rolled in that the US election had been called for Donald Trump.

Initially, organizing began across social media channels, with people in various cities creating their own unique events. As interest spread, however, the groups were consolidated, with 74 organizers from around the United States working together to plan the event in just two months.

On January 21, 2017 somewhere between 3.3 and 5.2 million people gathered on the streets of US cities holding hand-drawn placards and shouting messages. “Women’s rights are human rights” was the call to action posted on the website of the newly-founded activist collective Women’s March. Marchers interpreted that by promoting the causes dearest to their hearts: equality, LGBTQ rights, reproductive rights.

Though crowds of that size have proved hard to estimate, by all accounts, it was the largest single-day protest in American history. Officials have put the numbers at around 400,000 in Washington, D.C., 470,000 in New York City and 250,000 in Chicago.

Solidarity marches took place around the globe, including smaller demonstrations in Frankfurt and Berlin, London and Geneva. Pictures of plane-loads full of women headed to the DC march from around the country were posted across social media channels.

The reasons attendees had for marching on Washington were uniquely personal. Carolyn Shwash, one of the women who attended the Frankfurt protest told DW that as an American, she felt obligated to object. “I am an American whose current President objectifies women, criticizing them for their looks and has been taped speaking sexist remarks toward them. It is due to him and all that he represents as a racist, narcissist, xenophobe, bigot, and misogynist.”

Celebrities and activists joined in at the march, as speakers like Gloria Steinem and US Senator Kamala Harris took to the stage to encourage and inspire the majority-woman attendees to fight for their causes. Even though those political issues were disparate, “It was very relevant for us to go to Washington, DC, last year to send a message we were all united,” Linda Sarsour, a Women’s March co-organizer, recently told CNN.

Though the march lasted just one day, the Women’s March as a movement has not come to an end in the year since its initial action. The grassroots collective now has a Board consisting of a diverse group of women, most of whom were already active in social justice issues before the first march.

The public faces of the organization have made television appearances, spoken at conferences and continued to organize events, including a Women’s Convention in Detroit in October. They have also been spotted at further protests, including a spontaneous demonstration recently held in New York to protest the deportation of an immigrants’ rights activist.

The group, which joins other long-term activist organizations working for women’s rights, including March On, has become a go-to for women around the United States hoping to draw attention to political issues impacting them. State and local chapters have arisen and protests against public policy coordinated in cities across the country.

On January 21, 2018, the first anniversary of the Women’s March, these protesters will take to the national stage again — this time with a rally in Las Vegas. The city was chosen not only because it was the site of one of the largest mass shootings in recent US history, it is also a pivotal state in the upcoming mid-term elections.

“When 2018 came around, we had to be really strategic about what message we want to come out of this gathering,” Sarsour told CNN. “And in order for us to put forth a strong message that women are going to lead the victories in 2018 electorally, we had to go to a state that was relevant. We chose Nevada.”

Under the banner slogan “power to the polls,” organizers are working with a clear goal at their 2018 meeting, which they have deemed a rally, not a protest.

Politicians with a history of activism, such as Georgia Congressman John Lewis, and voter registration booths will be on hand to encourage greater civic engagement among the crowds and offer specific steps for citizens to take in increasing their political activism.

The momentum created by the women-led movement and its focus on “transformative social change,” according to their website, expands on a recent trend that has seen greater numbers of women and minorities declaring their candidacy for office in hopes of having an impact on public policy, especially when it comes to women’s issues.

Get Her Elected, a network that connects volunteers with specific skills to progressive candidates, has seen tremendous growth over the last year. Going into 2018 — an important year due to local and mid-term Congressional elections — the group counts over 1,600 volunteers working to get over 150 women candidates into office at both the local and national levels.

“I started noticing a gap in the pipeline between the number of resources dedicated to inspiring and empowering women to run and the resources actually available for women who took the leap and were actually in the race,” said coordinator Lily Herman. “In other words, women were getting lots of support in making the decision to file to run, but as soon as they were in the race, they were largely left to fend for themselves — especially if they had no money, were a first-time candidate, and/or weren’t supported by the local party establishment.”

Describing the network’s criteria for choosing women candidates to work with, Herman said, “There isn’t one singular policy issue so much as getting women into office dedicated to upending and then rebuilding our current political institutions. They want to break the status quo to create more equal and equitable economic and social outcomes for those underrepresented and marginalized in our current system.”

In that way, the network shares similar goals with the movement inspired by the Women’s March.

Although the elections set for November may feel far away, the largest single-day protest in American history seems to have made good on its message of empowering women as they take action. It’s a momentum organizers hope will last.