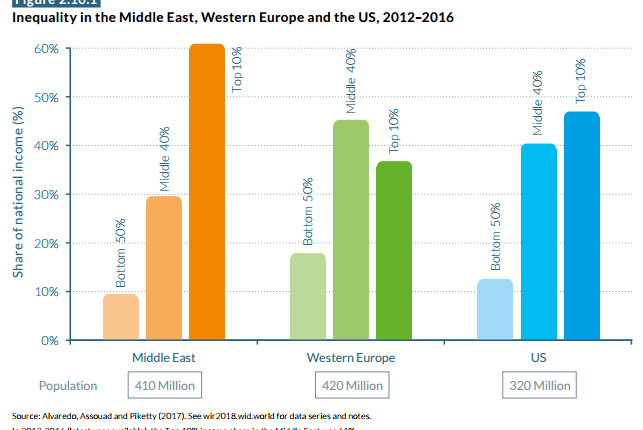 We are living in an era that many regard as difficult and unfair. Terrorism, climate change, and an out-of-control growing world population are only some of the troubles we humans are facing at this point of our exitence on earth. However, on the other hand, the picture may not be as dark as we think. Over the last century, human life expectancy has doubled, the global GDP per capita has noticeably increased, and we seem to be seeing a 10-fold drop in childhood mortality, according to Singularity University’s Singularity Hub. While humans may be developing their capabilities to sustain their own lives on planet earth, an issue remains persistent even during this era in which humans are considerably blossoming. That issue is inequality. While inequality extends to everything, income inequality remains the most prominent issue as the world still sees depressing differences in terms of global income between individuals and classes across different regions.

A report was issued on Monday by Oxfam, the international confederation of charitable organisations focused on global poverty alleviation, showing some very interesting findings. The report said that new billionaires had been rising at a record rate of one every two days over the past year, at a time when the bottom 50% of the world’s population witnessed no rise in wealth. It added that 82% of the global wealth that was generated in 2017 went to the wealthiest 1% of the world population.

Oxfam pointed out in its report that it is “unacceptable and unsustainable” for such a small minority of people to accumulate so much wealth while hundreds of millions of people struggle to depend on their poor pay.

It called on world leaders to shift more attention to the issue of inequality, and to start turning the talk about it into policies to tackle tax evasion and enhance the pay of workers, The Guardian reported.

“The concentration of extreme wealth at the top is not a sign of a thriving economy, but a symptom of a system that is failing the millions of hard-working people on poverty wages who make our clothes and grow our food.” said Mark Goldring, CEO of Oxfam.

The charity added that the wealth of billionaires had increased by 13% per year on average during the period from 2006 to 2015, in addition to an increase of $762bn (an equivalent of £550bn) in 2017, a total amount sufficient to end extreme poverty seven times. Interestingly, nine out of 10 of the world’s 2,043 dollar billionaires were men, according to The Guardian.

The World Inequality Lab recently issued its 2018 World Inequality Report. According to the report, the Middle East region specifically appears to be the most unequal region in the world. “Income inequality in the Middle East remains extremely high over the period extending from 1990 to 2016 as the top income share fluctuated at around 60–66% of total income, while the share of the bottom 50% and middle 40% varied between 8–10% and 27–30% of total income, respectively. Regional income has largely been concentrated among the top 1% of the adult population, which receives 27% of total income, that is three times more than the bottom, and approximately the same as the middle 40% of the population. Inequality in the Middle East is therefore among the highest of any region worldwide,” the report said.  These inequality levels in the region are comparable to or higher than those observed in Brazil and South Africa.

In the Middle East, this high level of income concentration is the result of huge inequality between countries rich in oil and countries rich in population. It is also the result of the inequality within these countries. However, the lack of good data is particularly clear in the case of the Gulf countries, as the low official Gini coefficient might indeed hide important aspects of their political economy, namely the growing share of the non-national population, a large majority of which is composed of low-paid workers, living in difficult conditions, according to the World Inequality Report. “The substantial growth of migrant workers in Gulf countries gives incentives to nationals within Gulf countries to defend their numerous privileges, beginning with restraining naturalisation given that national citizens typically do not pay income tax, benefit from significant social spending, including free healthcare and education, receive subsidies for electricity and fuel, and often receive other benefits such as land grants,” it added.